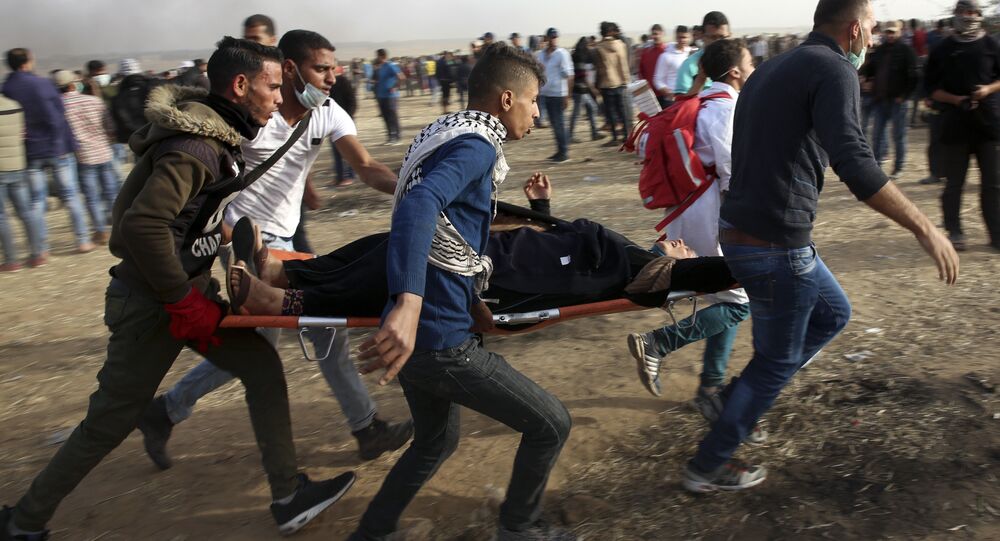 More than 1,000 Palestinians were wounded Friday and one journalist was killed in the third Friday of protests in Gaza dubbed the Great Return March. Radio Sputnik’s Loud & Clear spoke with Richard Becker, author of the book “Palestine, Israel and the US Empire,” to discuss Israel’s violent crackdown on the demonstration.

"The Palestinian[‘s] situation inside of Gaza is really a desperate one," Becker told host John Kiriakou and Sputnik News analyst Walter Smolarek. "In the first two weeks [of the Great Return March], when there were 31 Palestinians killed and more than 1,700 wounded by gunfire, the Israeli military reported zero casualties."

Along the border wall with Israel, Gazans continued the protest today. It began on March 30 with more than 30,000 protesters and is expected to continue until April 19, Israel's Independence Day. Palestinians call that day "Al-Nakba," Arabic for "the catastrophe." The demonstrators are demanding their right of return to their ancestral homeland of Palestine.

Becker said that while the Great Return March has received at least some international media attention, there is still very little given to the humanitarian crisis in Gaza. "They live in the largest open-air prison in the world under conditions that are rapidly deteriorating," Becker said.

"There are international bodies saying that by the year 2020 — which is only two years from now — much of Gaza will become unlivable," Becker told Loud & Clear. "The water is polluted; there's not enough food for people; housing is in terrible condition; the electrical supplies, many people have two to three hours of electrical power a day. Fishermen who go out are shot by the Israeli Navy on a regular basis. It's almost commonplace to read these stories."

The conditions Palestinians face in day-to-day living in Gaza are part of what propels them to resist the Israeli occupation, Becker argued. "I think the desperation of the situation explains in part why Palestinians have undertaken this great march of return at this time as we approach the 70th anniversary of the foundation of the state of Israel, which Palestinians view as Al-Nakba — the catastrophe, where they were pushed out of their lands," Becker said. Israel was declared a sovereign state in 1948.

Then, most Palestinians were farmers and were pushed "off their farms, out of their villages and cities and towns and ended up in places like Gaza, which is mostly refugee camps. And the majority of the population are refugees or the descendants of refugees who've been trapped now for 70 years and really, under increasingly desperate circumstances," Becker said.

This crisis is a "direct result of Israel's policies," Becker told the show, adding "this is an area [Gaza] that is surrounded militarily. The southern end of Gaza borders Egypt and the Egyptian government is also an ally of the United States government and the Israeli government at this point."

US officials have been mostly mute on both the Great Return March and the larger situation in Gaza. While Gazans continue demonstrations in hopes of bringing the world's attention to their cause, US officials have put the blame squarely on Palestinians. Jason Greenblatt, a former lawyer for US President Donald Trump and the Trump Organization, who is now the special representative for international negotiations, a newly-created position, and who advised the president on Israel during his election campaign, "has not said one word of criticism of what Israel has done in recent weeks and instead has condemned the Palestinians."

"This a kind of criminal regime in Israel that is fully supported by Washington and given the greenlight to do what they're doing: the shooting down of people who are absolutely defenceless and the result being the casualties we've been seeing in Gaza in the last few weeks," Becker said.