MOSCOW (Sputnik) - The Israel Defense Forces (IDF) on Sunday attacked the targets of the Hamas movement after an attempt to damage fence between Israel and the Gaza Strip and to arson an engineering vehicle, the IDF said in a statement.

"Yesterday, the security fence next to Israel & the Gaza Strip was damaged & there was an attempt to arson an engineering vehicle. In response, moments ago, the IAF targeted a terror objective in a military compound in Rafah, southern Gaza, belonging to Hamas, a terror organization," the statement said. 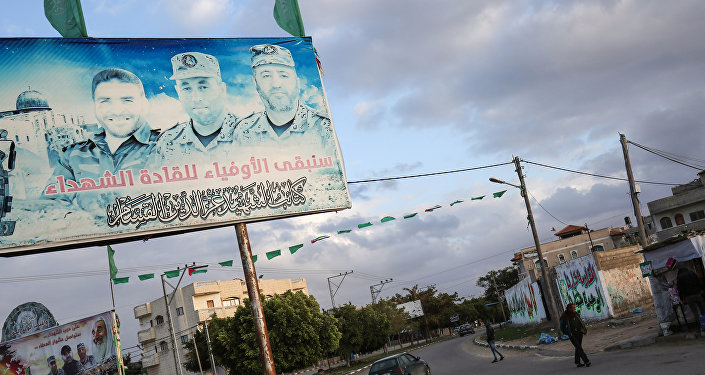 © AFP 2019 / SAID KHATIB
Palestinian Gov't Demands Hamas to Hand Over Full Control Over Gaza Strip
The press service added that that the defense forces would respond to any attempts to make harm to Israel claiming that "Hamas is held responsible for all aggression coming from the Gaza Strip."

The relations between Israel and Palestine have been pretty tense through the years. Palestinians seek to create an independent state in the West Bank. The Gaza Strip, along with the Golan Heights, the West Bank and the Sinai Peninsula were seized by Israel as a result of the Arab-Israeli Six-Day War in 1967.