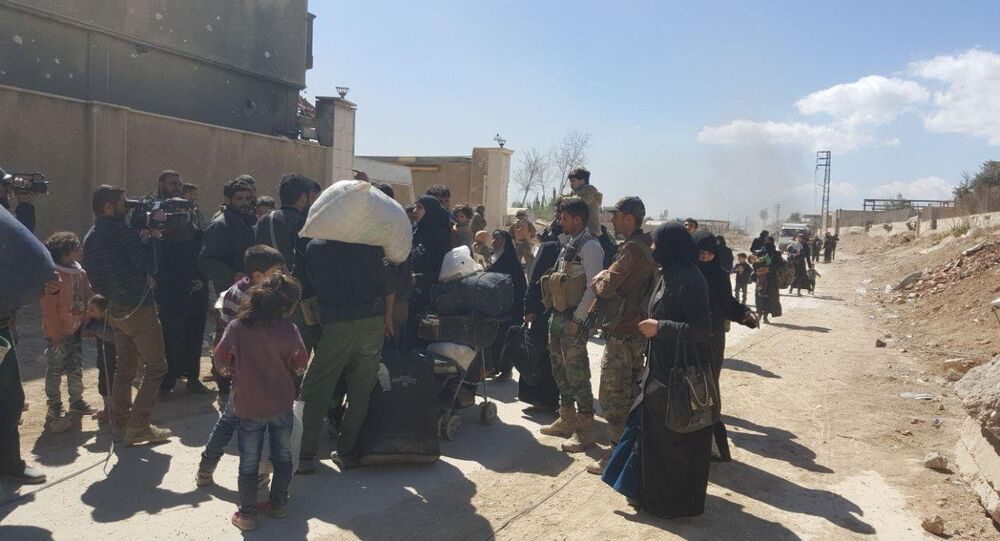 On February 24, the UN Security Council unanimously adopted a resolution urging all parties to the conflict to immediately stop hostilities and adhere to a long-term humanitarian ceasefire across the entire territory of Syria in order to ensure the safe and unhindered delivery of humanitarian aid, as well as the evacuation of the injured.

The Russian Center for Syrian reconciliation has reached an agreement on the withdrawal of the militants from the Ahrar al-Sham group from the Syrian city of Harasta in Eastern Ghouta, the Russian Defense Ministry said Friday.

"As a result of negotiations between the senior officials of the Russian Center for Syrian reconciliation with the leaders of the Ahrar al-Sham group, an agreement was reached on the withdrawal of the militants of its group from Harasta (Eastern Ghouta)," the ministry’s statement read.

According to the ministry, 1,895 militants and members of their families left the area on Thursday through the humanitarian corridor, and are being transported to the Idlib province by a convoy of 50 buses.

“Throughout the route, their security is being provided by the Syrian police under the supervision of officers of the Russian Reconciliation Center and representatives of the Syrian Arab Red Crescent,” the statement added.

More than 3,000 civilians have left Syria’s Eastern Ghouta on Friday through the humanitarian corridor near the Syrian settlement of Muhayam Al-Wafedin, Maj. Gen. Vladimir Zolotukhin, spokesman for the Russian Defense Ministry's Center for Syrian reconciliation, said.

According to the SANA news agency, five buses with 297 people on board including 100 men, 75 women and 122 children have left Eastern Ghouta.