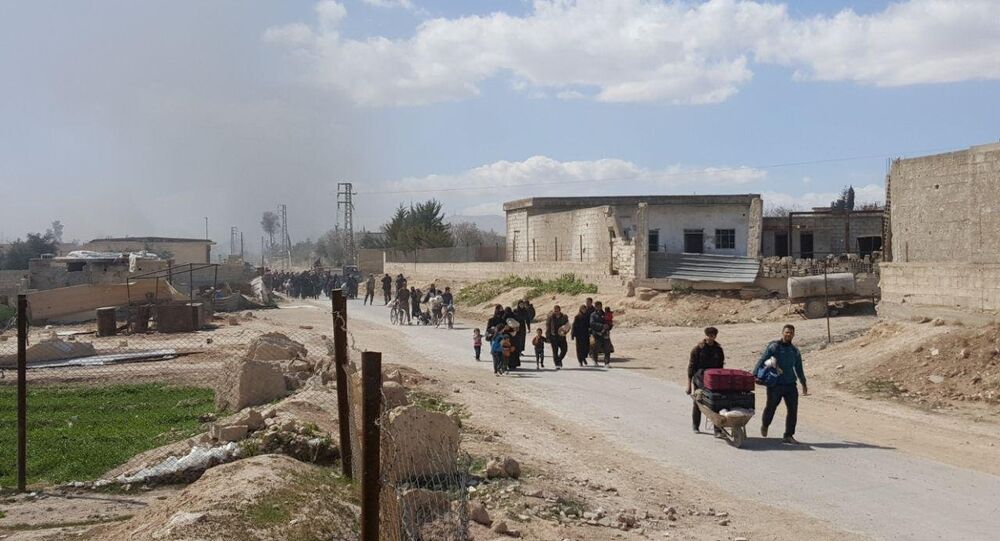 EASTERN GHOUTA (Sputnik) - Over 73,000 civilians have left Damascus suburb of Eastern Ghouta in Syria since the opening of humanitarian corridors, the Russian Defense Ministry's Center for Syrian reconciliation said in a statement.

Over 25,000 people have left Damascus' suburb of Eastern Ghouta through the checkpoint in the settlement of Hammuriyah, spokesman for the Russian Defense Ministry's Center for Syrian reconciliation Maj. Gen. Vladimir Zolotukhin said.

Earlier in the day, the official said that overall, more than 70,000 people had left Eastern Ghouta since the opening of the humanitarian corridors in late February.

On February 24, the UN Security Council unanimously ratified Resolution 2401 that urged all belligerent parties to instantly halt all hostilities and adhere to a humanitarian pause across Syria in order to guarantee the safe delivery of humanitarian aid, as well as medical evacuation of those wounded.

The ceasefire regime does not apply, however, to military operations against terrorist groups. Militants maintained to shell Damascus, with Russian President Vladimir Putin saying last month that terrorists in Eastern Ghouta had been shelling the capital around 50-80 times a day, including the region of Russia's embassy.