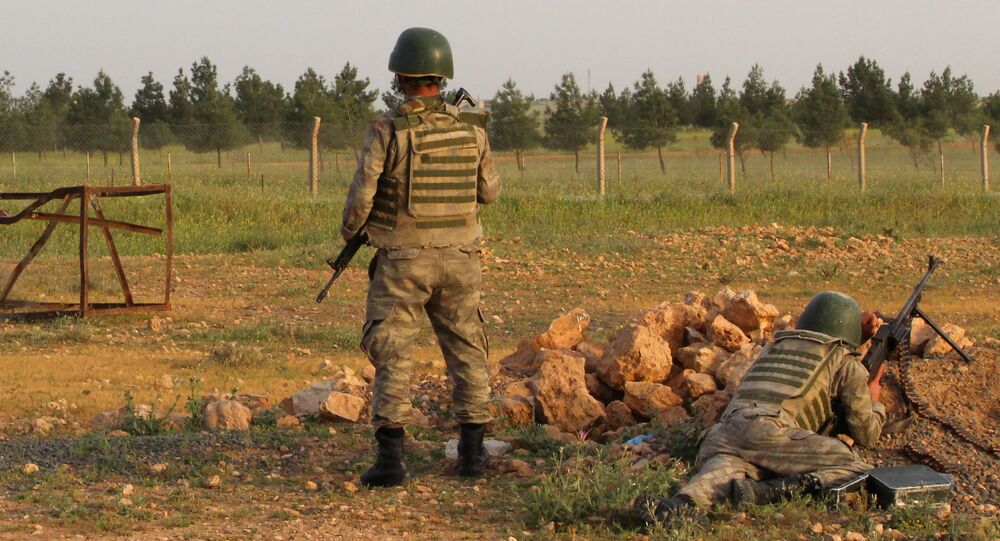 ANKARA (Sputnik) – Two Turkish servicemen were killed near the Turkish-Iraqi border as a result of an explosion of a booby trap staged by members of the Kurdistan Workers' Party (PKK), banned in the country, the General Staff of the Turkish Armed Forces said on Wednesday in a statement.

"On February 21, during an operation in the Semdinli district of the Hakkari province and northern Iraq, two our military comrades died as a result of the explosion of a booby trap staged by members of the separatist terrorist organization (PKK). One more our comrade was injured," the General Staff of the Turkish Armed Forces' statement said.

Since the beginning of the Operation Olive Branch, 1,780 terrorists have been killed in Syria's Afrin district, the Turkish General Staff said. Precisely, 65 members of Kurdish Democratic Union Party (PYD), People's Protection Units (YPG) and Daesh terrorist organization were killed in Afrin on Feb. 20.

Last month, Turkey also launched a military operation in the northern Syrian district of Afrin against the US-backed Kurdish People’s Protection Units (YPG), which is regarded by Ankara a organization affiliated with the PKK.

© AP Photo
No One Can Stop Turkish Forces if Syrian Army Enters Afrin to Protect Kurdish Militants - FM
At least 26 Turkish servicemen were killed and over 70 were injured during the Olive Branch operation.

Tensions between Ankara and the Kurds escalated in July 2015 when a ceasefire between Turkey and the PKK collapsed over a series of terror attacks allegedly committed by the PKK members. The Turkish forces are involved in anti-PKK raids across the country.