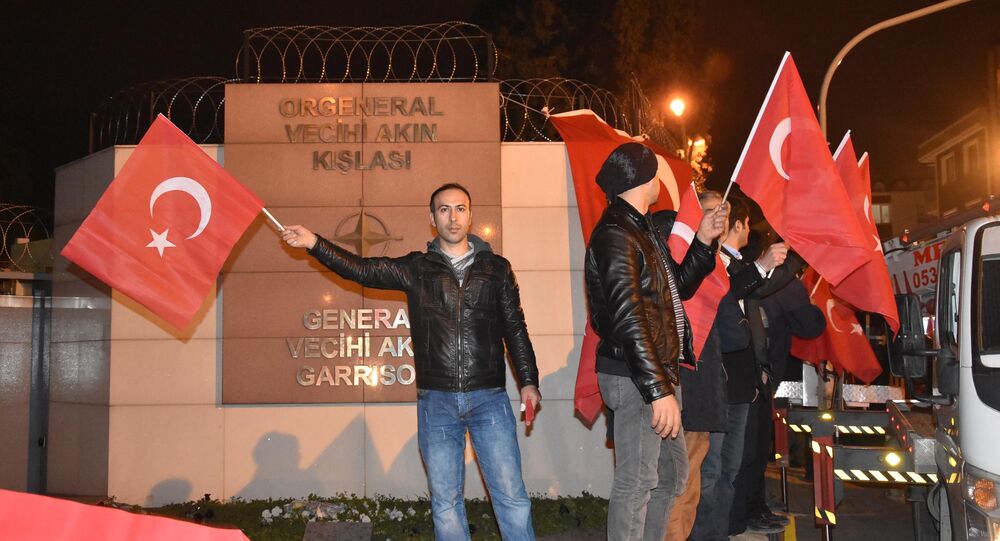 A crowd of protesters gathered in front of a NATO barracks building, hanging up a large number of Turkish flags and chanting slogans: "Martyrs do not die, the Homeland is indivisible!"

As reported by Sputnik Turkey, in the town of Buca in the Turkish province of Izmir, locals came out into the street near the Sirinyer quarter, where the house of the tank crew member Muhammed Cihangir Cubukcu, was located.

Cubukcu was killed in the ongoing operation of the Turkish armed forces in Syria’s Afrin. Locals came to the house to express their condolences to the family of the deceased soldier, and hung Turkish flags along the street where Cubukcu’s parents live.

Flags were also hung on the building of the barracks of General of the Army Vecih Akın, which houses the headquarters of the allied land forces of NATO. It is reported that an American officer tried to remove the flags from the barracks building, which prompted protests from the local population.

During the protest, the chairman of the Izmir branch of the ruling Justice and Development Party, Bulent Delican, and the head of the Izmir section of the nationalist Great Unity Party, Erdem Oksuz, issued a joint statement to the press.

© Photo : DHA
Izmir, Turkey
© REUTERS / Khalil Ashawi
Ankara Probing Country of Origin of Weapon That Destroyed Turkish Tank in Afrin
Bulent Delijahn said, “We gathered in front of the house of our brother Mohammed Cihangir Cubukcu, who died heroically in Afrin. His family is now in Urfa, where the funeral will take place tomorrow. We learned that yesterday, when flags were hung in front of the house of the deceased, an unpleasant incident occurred. Today we came here specially to declare that we will hang our glorious flag across the entire area of the Turkish Republic within an area of 789,000 sq. Km, and no one will be able to prevent us from doing so.”

He further said that he came there on behalf of the AKP and the Great Unity Party to decorate the entire street with Turkish flags.

“Let them rest in peace all the fallen Turkish warriors in Afrin and if someone tries to stop us from putting up flags in front of the homes of our soldiers, we will force them to answer for it, and we will hang this flag everywhere,” Delijahn said.

“At first, there was the information about an American officer who was trying to prevent flying the flag near barracks,” — Mustafa Çetin, deputy chairman of the regional branch of the ruling Party of Justice and Development in Buca told Sputnik. “After hearing about this incident, locals started flying more and more Turkish flags around the house, where the demised serviceman used to live. As our country is conducting operation in Afrin, we could not stay indifferent to the attempt to prevent the flying of the Turkish flag in the district where the house of the heroic serviceman’s family is located. This is the Republic of Turkey’s territory. As the chairman of the Izmir branch of our party said, we will fly the Turkish flags around the whole Turkey’s 780, 000 sq. m. territory. This act of protest manifested the solidarity of  unindifferent citizens of our country, everything happened spontaneously, people were unified by the movement to defend the honor of the soldier who died as a hero.”

​Last month, the Turkish Armed Forces launched Operation Olive Branch against the Kurdish forces in Afrin, an area controlled by the US-backed YPG, which are considered by Ankara to be affiliates of the Kurdistan Workers' Party (PKK), designated as a terrorist organization in Turkey and several other countries.

The operation has been conducted jointly with forces of the the Free Syrian Army. Damascus has firmly condemned the operation as an assault on Syria's sovereignty. Moscow, in turn, has urged all the parties to exercise restraint and called for respect for Syria's territorial integrity.