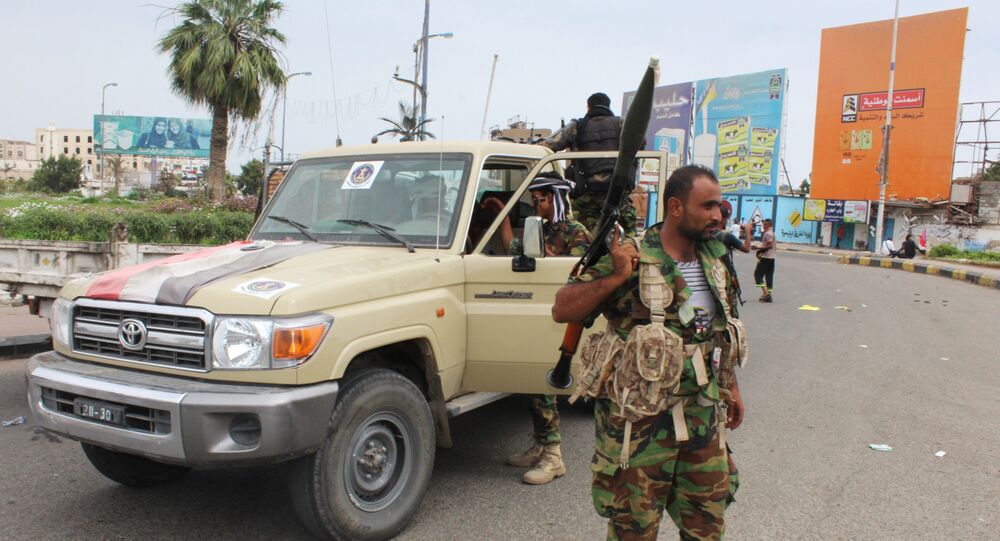 The militants have managed to capture a number of government buildings, including the HQ, in the port city of Aden, a source told Sputnik.

The Southern Transitional Council, which supports the idea of separation from the Houthi-dominated north, planned to stage a rally on Sunday, demanding that Yemeni president, Abdrabu Mansur Hadi dismiss his cabinet.

The southern protesters accuse Prime Minister Ahmed bin Dagher and his ministers of corruption, thus urging Hadi to fire them Sunday and then form a new government.

"They [Southern Transitional Council] are moving militarily, setting up new military checkpoints and attacking camps of the legitimacy (government)…. In Sanaa, there has been a consolidation of the coup d'etat, and here in Aden, there is a coup against the legitimate authorities and the project of the federal state."

According to the prime minister, Yemen's collapse can be only prevented through the "unity of the Arab position," including Saudi Arabia and the United Arab Emirates (UAE), with regard to the crisis that began in Aden, which "is gradually moving toward a full-scale military confrontation."

"The clashes must immediately cease, and the military must return to their barracks. It is necessary to return to the dialogue between the political forces in Aden," Dagher said, adding that any provocations in Aden are benefiting the Houthi rebels.

According to the Sputnik source, heavy clashes are taking place in the area: the government forces are fighting with the militants.

"The armed formations of the Transitional Council today seized a complex of court buildings, the general secretariat of the government and the Jebel Hadid military camp in the Crater area," the source said.

As Al Mayadeen TV channel reports, the fighting has already claimed lives of at least 20 people and injured dozens.

Previously, one of the local doctors said that as a result of the clashes in the Chorus Maskar region, at least nine people had been injured, two of them are in critical condition. It is noted that the authorities closed the Aden airport in connection with the current situation.

In an effort to avoid clashes, Hadi banned public gatherings for the time of expected rallies, what was the reason for the arrival of thousands of the Southern Transitional Council's supporters to the port city.

The Saudi-led military coalition, supporting Hadi, called on all political forces to show restraint and adhere to peaceful dialogue amid the ongoing clashes.

Heading the call of the Southern Transitional Council… This is what it looked like today as southerners arrived in Aden #SouthYemen. #معا_لاسقاط_حكومه_بن_دغر pic.twitter.com/zGK9ThFRR8

Separatists created their own transitional council of Southern Aden in May 2017. The former provincial mayor, Aidarus al-Zubeydi, who was dismissed by President Abd Rabbu Mansour Hadi, is leading the movement.