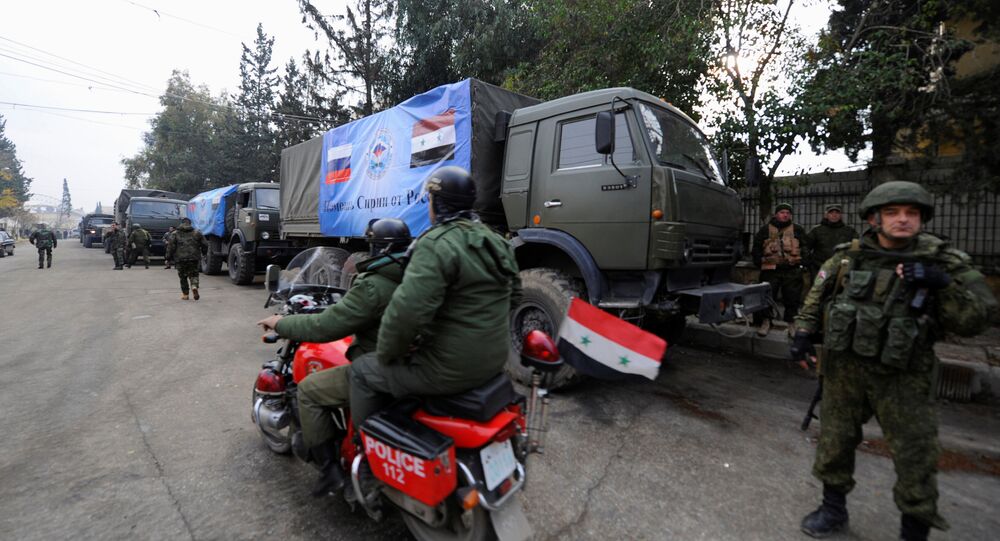 Russian servicemen have saved Russian women and children from hot spots and prisons in Syria.

MOSCOW (Sputnik) — More than 160 Russian generals and officers took part in the operation to save Russian women and children, who were then taken by military aircraft from Syria's Hmeymim to Russia's Grozny on Saturday, Russian parliament's upper house member Ziyad Sabsabi said.

On Saturday, a special flight with the first large group of 7 women and 14 children between the ages of three months and ten years, rescued from the hot spots of the Middle East, arrived in Russia's Grozny, the capital of the Chechen Republic.

"This was a military operation, not a humanitarian action, involving more than 150 officers of the Russian Armed Forces and more than 10 generals who participated in the release and return of our citizens, in this regard, special thanks to the Defense Minister Sergei Shoigu and the Chief of the General Staff of the Russian Armed Forces Valery Gerasimov," Sabsabi, who is also Chechen leader Ramzan Kadyrov's special representative in the Middle East and North Africa, said.

The rescued are residents of Chechnya, Dagestan and one woman from the Krasnoyarsk Territory who were found and rescued from hot spots and prisons in Syria, Sabsabi said, adding it is difficult to say how many more Russian women and children are currently in Syria.

© Sputnik /
Over 1Mln Syrians Return to Their Homes Since Start of Russia's Operation - MoD
"We cannot say how many — we're working on this in fact, we're checking any information, regardless of the source, because information that seems false at first glance may be true," he explained.

Sabsabi stressed that the Russian Defense Ministry had joined the work to save Russian citizens, thus giving hope that all the surviving women and children would be returned to their homeland.

"The most difficult thing is to find people, in our work we interact with the special forces of the Syrian and Iraqi armies, Kurdish armed groups. We can not fail to note the assistance of the leadership of the Syrian Arab Republic in the person of [Syrian President] Bashar Assad, who instructed to send Russian citizens, without waiting for judicial decisions," the lawmaker said.

According to Sabsabi, many returnees had no documents, which has made their return more difficult.

"Only eight people had documents, 13 children and women — without documents, and this greatly complicated the work. We have contacted the registry office, Russia's Ministry of Internal Affairs and the Federal Security Service [FSB] to formalize the procedure for their return to their homeland," the parliamentarian said.

In the last three months, several humanitarian flights have been carried out from Iraq to Grozny, which brought 25 people, including four women, to their homeland. Among those rescued from the war zone were residents of Chechnya, Dagestan, Nizhevartovsk, Tver and Kazakhstan.