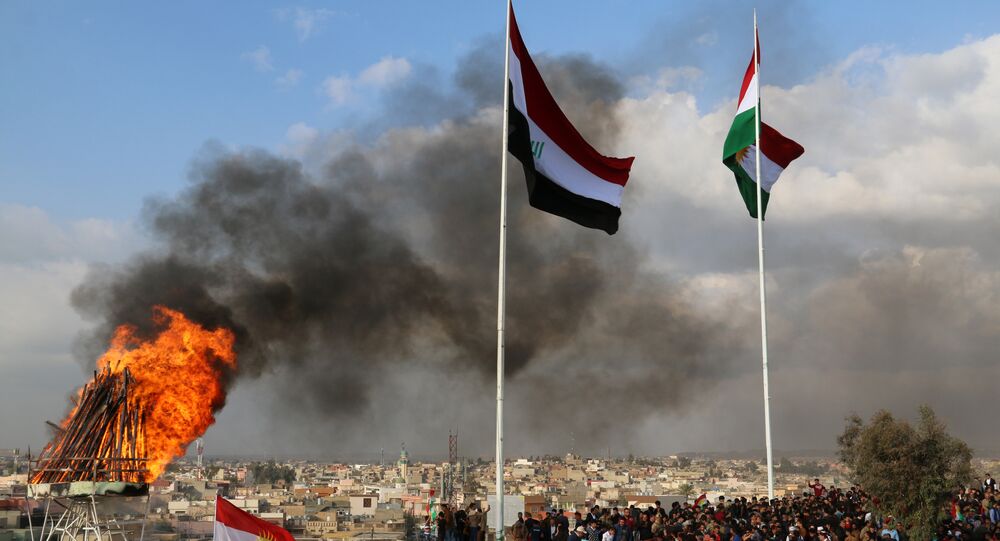 The development of the conflict in the Iraqi city of Kirkuk, where Iraq's military units clashed with Kurdish Peshmerga detachments, has already affected the global economy.

“Oil Brent is now quoted at 1.4% higher than at the close of Friday's trading in Moscow, with the main rise happening this morning. Market participants are reacting to the escalation of the conflict between the Iraqi Kurdistan authorities and the central government of Iraq. …The dynamics of oil markets … were influenced by emerging over the weekend of reports that Saudi Arabia may postpone holding an IPO of company Aramco,” a report by an analyst of Sberbank KIB read.

© REUTERS / Stringer
Peshmerga Calls Iraqi Army Campaign in Kirkuk 'Declaration of War'
According to the US oil and gas service company Baker Hughes, a GE Company (BHGE), the number of drilling rigs in the US fell by eight, or 0.85 percent, to 928 units. In annual terms, the number of installations decreased by 389 units, or by 1.7 times.

The Iraqi troops have been conducting an operation in the region and have reported capturing the Kirkuk airport from the Kurdish Army in the oil-rich region, which aims to gain independence like Iraqi Kurdistan.

The Iraqi federal police managed to capture the Kirkuk administration building without any fight, a source told Sputnik.

© AP Photo / Hussein Malla
Kurdistan Sends Peshmerga Troops to Kirkuk Amid 'Threats' by Iraqi Army
Earlier in the day, Hemin Hawrami, a senior assistant to Kurdish President Masoud Barzani, said that the Peshmerga, in retaliation, had destroyed four Humvees that were trying to enter the province of Kirkuk from the south.

"The Peshmerga will continue to defend Kurdistan, its peoples and interests," the Security Council added.

Iraqi Prime Minister Haider Abadi ordered the country’s army and police to secure bases and federal installations in Kirkuk, but avoid confrontations with the Kurdish forces.

Kurdish television channel Rudaw reported earlier in the day, citing a Peshmerga commander, that at least seven members of the PMF were killed during clashes in Kirkuk.