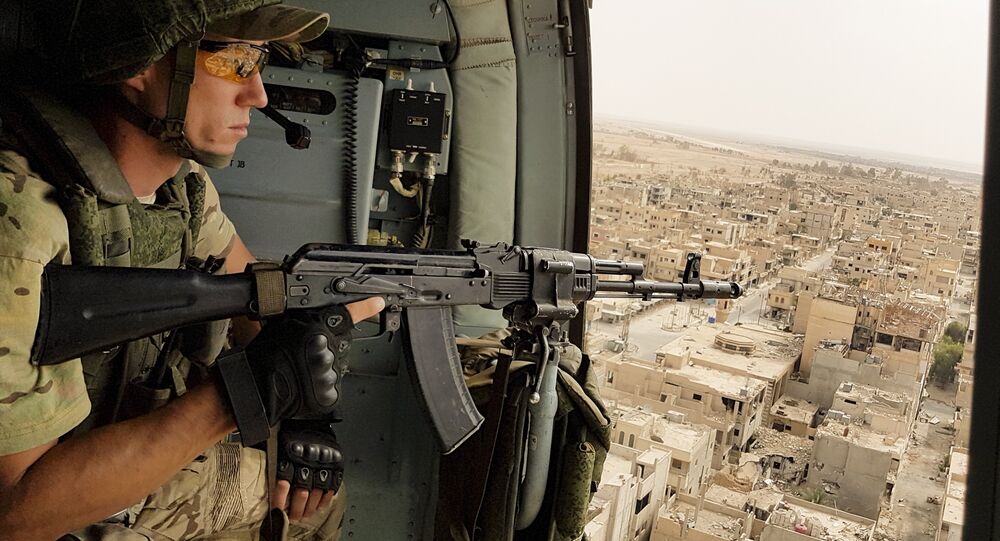 According to the CIS Anti-Terrorism Center, 90 percent of Syria’s territory has been liberated from terrorist groups.

KRASNODAR (Sputnik) – Around 90 percent of Syria’s territory has been liberated from terrorist groups, Andrey Novikov, the head of the Commonwealth of Independent States Anti-Terrorism Center, told Sputnik.

"According to the estimates of the military, 90 percent of Syria's territory has been freed of terrorist groups, which is a very positive result," Novikov said.

© CC0
Pentagon Denies US-Led Coalition Works With Daesh Terrorists in Syria
In early September, the Syrian government troops, backed by Russian airstrikes, broke a three-year Daesh blockade to the west and south of Deir ez-Zor. On Monday, the Syrian Army crossed the Euphrates River with the support of the Russian Aerospace Forces near Deir ez-Zor, dislodging militants from a number of settlements, and are currently developing an offensive eastward.

Militants of the Daesh terrorist group (banned in Russia), suffering losses in Syria are relocating to Pakistan, Andrey Novikov added.

"Relocation of significant Daesh forces from Syria to Iraq to the territory of Waziristan (Pakistan) with further redistribution observed since the fall of 2016. In other words, resolution of military and political tasks in Syria lowers the number of armed radical individuals physically on one hand, but on the other it forces ISIL to not only change their tactics but also the geography of upcoming activities," Novikov said.

"The majority of terrorists will return to their origin countries, or go to other states (both CIS and the European Union) via the routes they used to leave for conflict zones. In practice, this means using connecting flights from Turkey to airports of Commonwealth’s [CIS] cities. Special research shows that the Balkan route is especially in demand," the head of the Commonwealth of Independent States Anti-Terrorism Center added.

According to Novikov, Hungary and Poland are also used as transit countries, as well as Romania and Switzerland to a lesser extent.

“A new model of extremism is exported from combat zones to Central Asian nations, it was modernized technologically and tactically, adapted to the specifics of the multinational composition of participants,” Novikov added.

The Russia-West sanctions regime seriously complicates the cooperation of security services of these countries, Andrey Novikov stated in an interview to Sputnik.

Russia continues its fight against terrorists in Syria which began on September 30, 2015, at the request of President Bashar Assad.