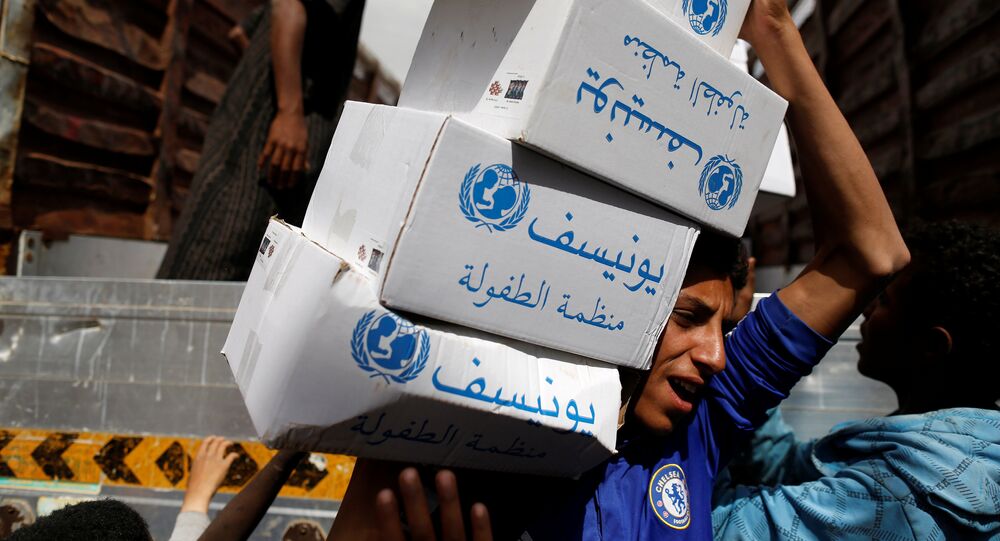 According to IOM statement, organization in cooperation with a number of humanitarian organizations and watchdogs will launch three new assistance programs in Yemen.

MOSCOW (Sputnik) – The International Organization for Migration (IOM, or the UN Migration Agency) in cooperation with a number of humanitarian organizations and watchdogs will launch three new assistance programs in Yemen to alleviate the crisis in the war-torn country, the IOM said in a statement on Tuesday.

"The UN Migration Agency, and partners are announcing three new major interagency humanitarian programmes in Yemen targeting 255,354 people, including stranded vulnerable migrants and conflict-affected people… The three programmes aim to identify and reduce the vulnerabilities of conflict-affected displaced people, host communities and migrants in Yemen, as well as reducing their morbidity, mortality and suffering," the statement read.

© REUTERS / Khaled Abdullah
Yemen Faces Largest Cholera Epidemic in the World As Health System Collapses
Under the first program, IOM plans to provide psychological assistance to over 30,000 Yemenis. The mission is specifically targeting children who need support to reintegrate into society after experiencing gender-based violence, human trafficking or other traumatizing experiences.

The humanitarian organizations will also provide medical assistance, including cholera treatment, to the Yemenis, particularly those in the governorates of Aden, Lahj, Taizz, Saada and Sanaa.

"Some 101,680 Yemenis affected by the enduring conflict in those areas, including internally displaced persons (IDPs), returnees and host community members, will receive medical assistance, including cholera treatment, from IOM and the Norwegian Refugee Council (NRC)," the statement read.

Finally, the IOM and its partners will deliver emergency assistance to undocumented migrants who illegally arrived to Yemen from eastern Africa, primarily from Ethiopia and Somalia, hoping to reach prosperous Gulf states.

"IOM will be partnering with the Danish Refugee Council, NRC, Handicap International and Intersos to implement a large programme providing 96,275 vulnerable migrants with emergency support. Over the next three years, vital assistance will be provided to sick and injured migrants, migrants with special needs, victims of human trafficking and migrants in detention," the statement said.

On July 27, three UN agencies — the United Nations Children's Fund (UNICEF), the World Food Programme (WFP) and the World Health Organization (WHO) — called on the global community to substantially increase its assistance to Yemen amid growing humanitarian crisis. According to WHO, 18.8 million people are in need of humanitarian aid in Yemen, while another 14.8 million people have no access to health care services.

Additionally, the country is suffering from a cholera outbreak, with the number of reported cases surpassing 500,000, according to WHO's statement issued on Monday.