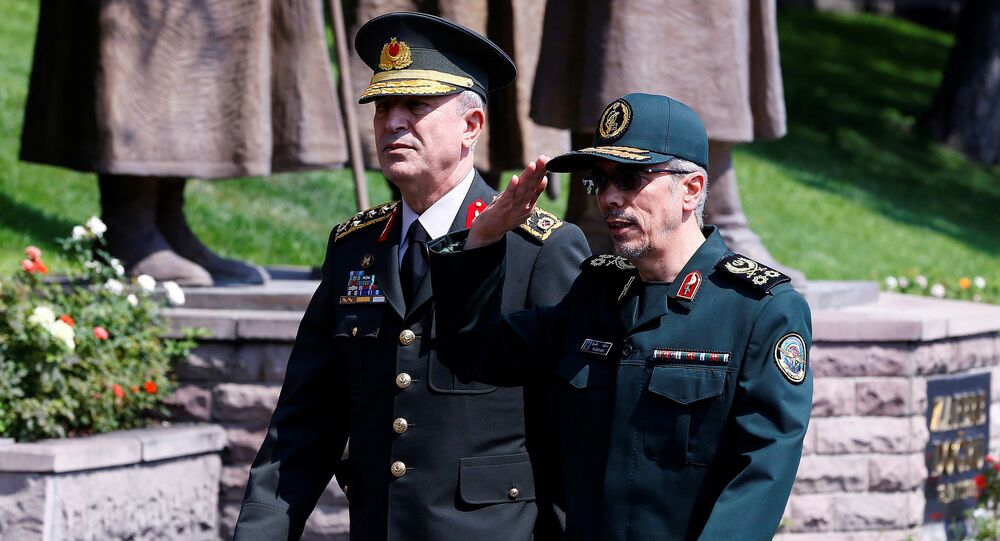 Iranian Chief of Staff Gen. Mohammad Hossein Bagheri has arrived in Ankara to hold talks with a number of high-ranking Turkish officials on cooperation in settling the crises in Syria and Iraq, local media reported Tuesday.

MOSCOW (Sputnik) – According to the Daily Sabah newspaper, Bagheri, accompanied by Iran's military officials, is set to stay in Ankara until Friday. This visit marks the first ever Iran-Turkey diplomatic contact of high-level military officials, representing the willingness of both parties to reach a common understanding on key security issues in Syria and Iraq despite certain differences in the approaches of the two countries to the situation, the sources told the media outlet.

© REUTERS / Omar Sanadiki
Iran, Russia, Turkey Making Every Effort in Astana for Syria Settlement - Tehran
The parties will reportedly discuss the potential handover of the Syrian city of Afrin to Turkey. Currently, the city is controlled by the Kurdish People’s Protection Units (YPG), which Ankara considers to be affiliated with the Kurdistan Workers’ Party (PKK), a designated terrorist group in Turkey. According to the sources, the handover may happen if Turkey takes concrete measures to make Syrian opposition groups withdraw their forces from certain regions in the southern part of the country.

The parties are also expected to hold talks on the recent developments in the Syrian province of Idlib.

The media outlet pointed out that Iran and Turkey shared a common position on the forthcoming independence referendum in Iraqi Kurdistan, with both claiming that independence of the region may exacerbate the conflict in the Middle East. Therefore, the plebiscite is most likely to become another topic on agenda of Bagheri's visit.

Iraqi Kurdistan independence referendum is set to be held on September 25.