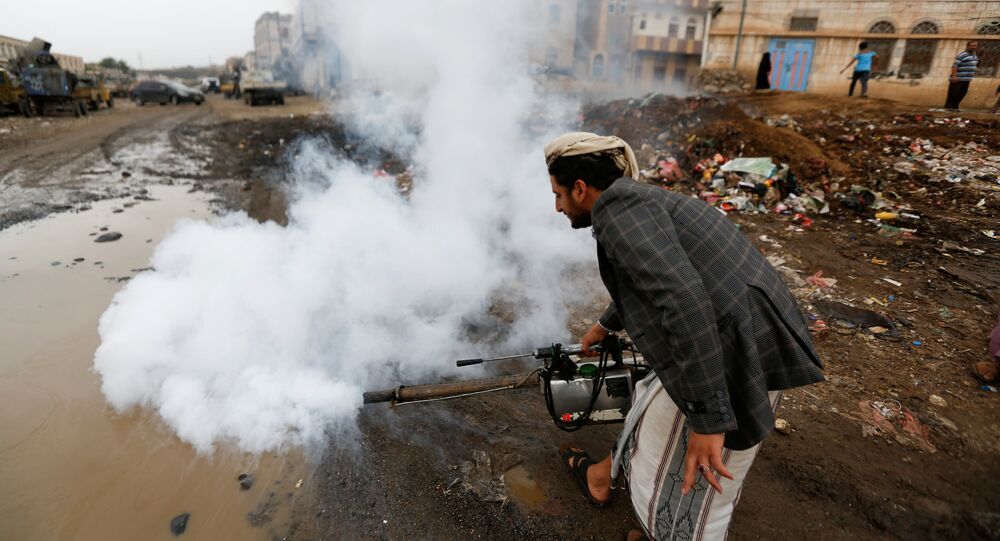 According to the World Health Organization (WHO), the number of suspected cholera cases in war-ravaged Yemen has reached half a million since the start of the ongoing civil war in 2015 between the internationally-recognized Yemeni government and a collection of rebels led by the Shiite Houthis.

The civil conflict, which intensified when a Saudi-led, US-backed coalition launched massive airstrikes against the Houthis in 2015, has killed more than 7,600 people and injured 42,000, placing more than 20 million Yemenis in dire need of humanitarian assistance.

Since July, almost 2,000 people have been killed by the waterborne disease, which caused by the bacterium Vibrio cholera, according to the Anadolu Agency.

The disease — which causes diarrhea and dehydration — has been rapidly spreading during the war as a result of poor hygiene and sanitation conditions as well as lack of access to clean water supplies.

"The spread of cholera has slowed significantly in some areas compared to peak levels but the disease is still spreading fast in more recently affected districts, which are recording large numbers of cases," the WHO said.

Some of those infected by the bacterial disease either exhibit no or slight symptoms. However, in severe cases, the disease can become deadly.

With more than half of all medical facilities in Yemen closed due to the disastrous effects of the war, Yemen's health service has struggled greatly with the country's cholera epidemic.

In July, the International Committee for the Red Cross declared that "Yemen's cholera outbreak is a direct consequence of a conflict that's brought the health system to its knees."

The number of suspected cholera cases in Yemen is expected to continue to increase and surpass a whopping 600,000 by the end of this year, according to predictions by the International Committee of the Red Cross. the cholera mortality rate with early detection and proper treatment is less than one percent, but rises to 50 to 60 percent if left untreated, according to the WHO.

Last month, UN Humanitarian Relief Coordinator Stephen O'Brien said that "millions of Yemeni civilians — women, children and men — continue to be exposed to unfathomable pain and suffering" at the hands of the epidemic.

The International Rescue Committee and 20 other humanitarian organizations have pleaded with the UN Security Council to order an immediate ceasefire in Yemen, to no avail.

Yemen sits on the strategically significant oil-shipment waterway Bab al-Mandab, the southern entrance to the Red Sea, causing many to view the conflict in the country as a politically motivated struggle between the Shia-majority Iran and Sunni-majority Saudi Arabia.

Over 300 Somalis Return Home After Boat Crash in Yemen