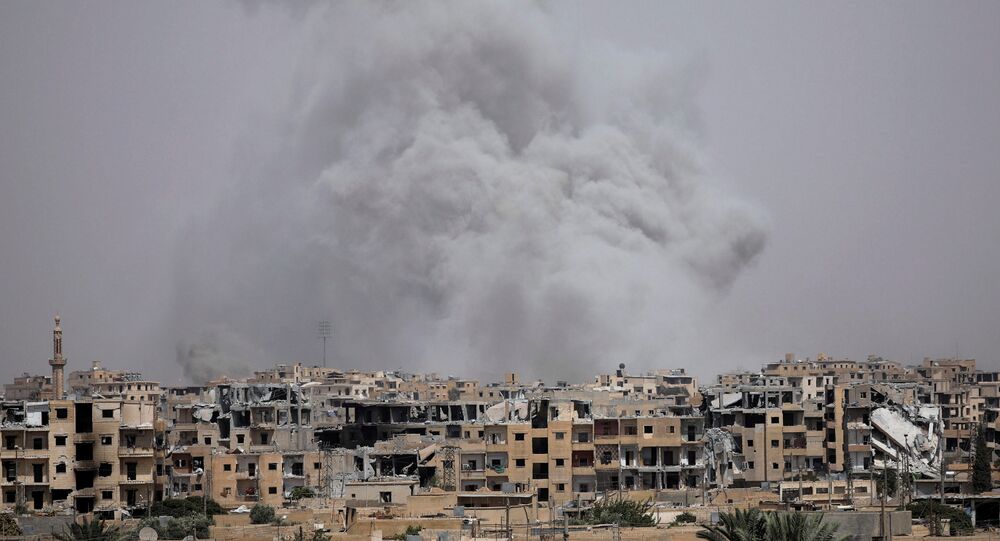 US-led coalition said Thursday it had carried out 18 air strikes against Daesh in Iraq and Syria, destroying the terrorist group's fighting positions and equipment.

WASHINGTON (Sputnik) — The coalition airstrikes against the Daesh terror group (banned in Russia) destroyed 27 fighting positions and an improvised explosive device (IED) factory near the city of Raqqa in Syria on Wednesday, Operation Inherent Resolve said in a press release.

© REUTERS / Omar Sanadiki
Syrian Army Retakes Some 500 Square Miles From Daesh in As Suwayda
In Iraq, the coalition carried out two strikes consisting of four engagements against Daesh targets. The strikes suppressed a Daesh unit near Kisik and engaged another unit as well as destroyed a building and vehicle near Tal Afar.

The US-led coalition of more than 70 members is conducting airstrikes, ground-based and rocket-propelled artillery fire against Daesh in Syria and Iraq. The strikes in Iraq are conducted in support of the Iraqi government, but those in Syria are not authorized by the UN Security Council or the government of President Bashar Assad.

The armed conflict in Syria has been raging for six years with government forces fighting against both Syrian opposition groups who strive to overthrow President Bashar Assad and numerous terrorist groups.

Daesh Still a Threat to Global Security Despite Progress in Syria, Lavrov Says