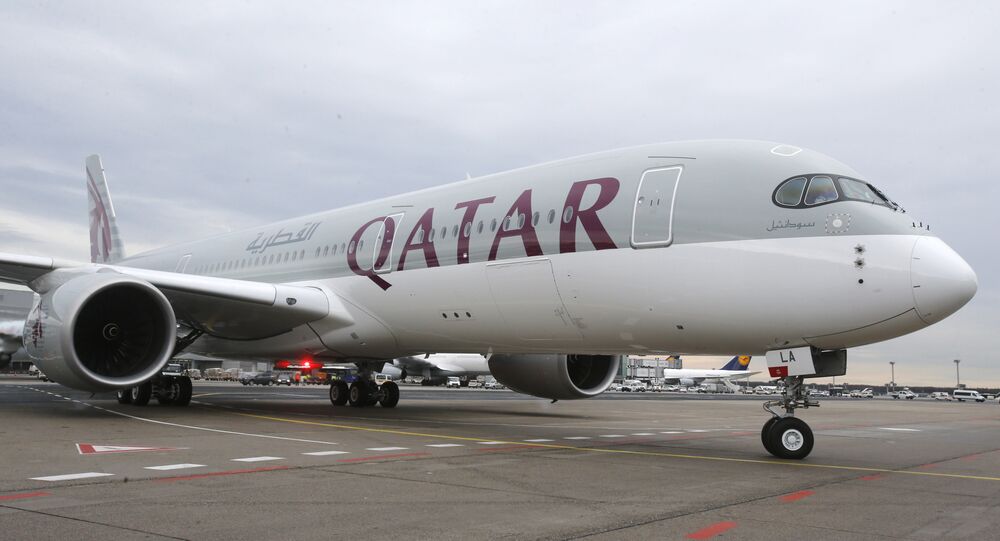 The Ministry of Transport and Communications (MTC) of Qatar and the counry's Civil Aviation Authority (CAA) denied reports that Bahrain, Egypt, Saudi Arabia and the United Arab Emirates will allow Qatari airplanes to use their airspace in cases of emergency, local media reported Sunday.

© AP Photo / Hadi Mizban
Qatar to Be Allowed to Use Arab States’ Airspace in Emergency Cases – Reports
MOSCOW (Sputnik) — Earlier in the day, the SPA news agency said that a total of nine corridors had been defined to be used in emergency cases, one over the Mediterranean Sea under Egypt’s control and eight more in the Persian Gulf area, adding that the measure had been adopted under the auspices of the International Civil Aviation Organization (ICAO).

"The Ministry of Transport and Communications and the Civil Aviation Authority confirm that those countries have issued no navigation announcements as followed at the International Civil Aviation Organization (ICAO) and call upon the blockade countries to not leak such incorrect news before the ICAO Council's extraordinary session, scheduled for tomorrow (Monday) in Montreal, Canada," the two agencies said in a joint statement, as quoted by The Gulf Times.

In early June, the four aforementioned countries cut off diplomatic relations with Qatar, accusing it of supporting terrorism and meddling in their internal affairs. Kuwait, acting as a mediator in the crisis, handed over to Doha the ultimatum of the Gulf states with 13 demands, including the requests to severe Qatar’s relations with Iran, close Turkey’s military base in Qatar and shut down the Al Jazeera TV channel, as well as to end support for the Muslim Brotherhood, a terrorist organization banned in Russia.

Qatar refuted all accusations and refused to comply with the demands.