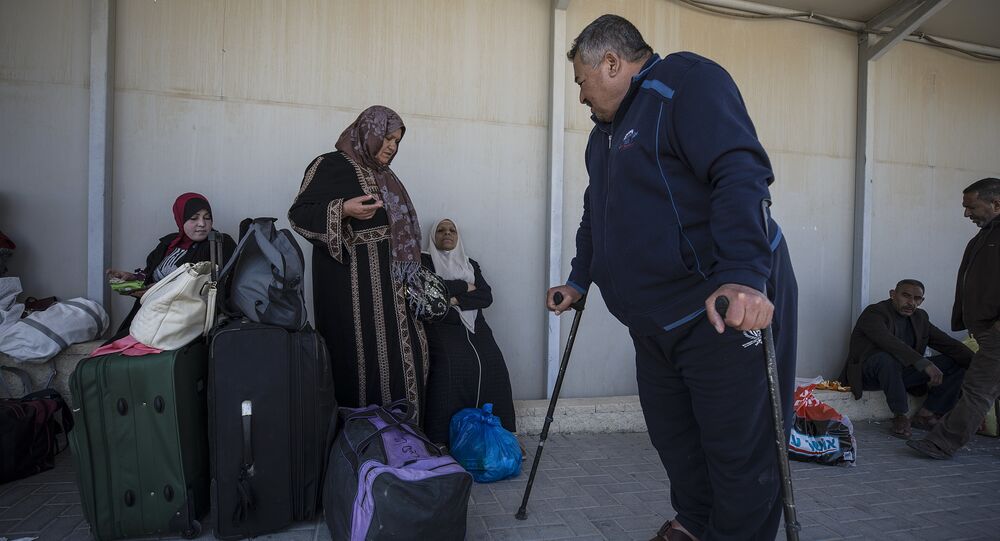 Ashraf al-Qudra, a spokesman for the Health Ministry in the Gaza Strip talked to Sputnik Arabic about the deteriorating situation in Gaza after Israel toughened its travel rules for Gazans seeking medical treatment outside the coastal enclave, equating it to a declaration of war against sick Palestinians and calling it a crime against humanity.

© AP Photo / Ariel Schalit
Israel Blocks Observers From Entering Gaza to Prevent Abuse Documentation - HRW
"Since the start of the year, Israel has toughened Gaza exit regulations for medical purposes. Since April, it has been practically impossible to leave the enclave. It has already led to the deaths of 11 people," Ashraf al-Qudra told Sputnik Arabic.

The spokesman for the Health Ministry in the Gaza Strip equated it to a declaration of war against sick Palestinians. He urged the lifting of the ban, which clearly violates international laws and could be regarded as a crime against humanity.

The Head of the Central Children's Wing of the Hospital Complex in Gaza, doctor Allam Abu Hamida told Sputnik that children, especially newborns, who are in need of intensive care, are suffering the most.

Every month, there are 10-15 newborns, facing death, who need medical treatment outside Gaza, he said.

He said that in recent days three children have died within one week in Gaza after failing to receive permits to seek treatment in better, more equipped hospitals outside.

© AP Photo / Adel Hana
Turkey to Send Fuel to Help Gaza Blackout as Hamas, PA Argue Over Blame
"There is a real fear of more deaths with the ongoing ban of medicine from entering (Gaza) and for the sick travel permits for treatment," AFP quotes Yusef Abu Rish, undersecretary of health at the Gaza ministry, as telling a press conference.

"The crime of banning children from travelling for treatment is part of a series of crimes against the health sector in Gaza," he said.

The Israeli military body responsible for exit permits did not immediately respond to a request for comment, the agency concluded.

According to UNSCO (UN Special Coordination Office for the Middle East peace process), since September 15, 2016, Israel has significantly reduced approvals for Palestinians to leave Gaza, including patients.

Last December, Israel approved fewer than 42 percent of applications to leave Gaza for medical care, the lowest rate since 2009, according to UNSCO.