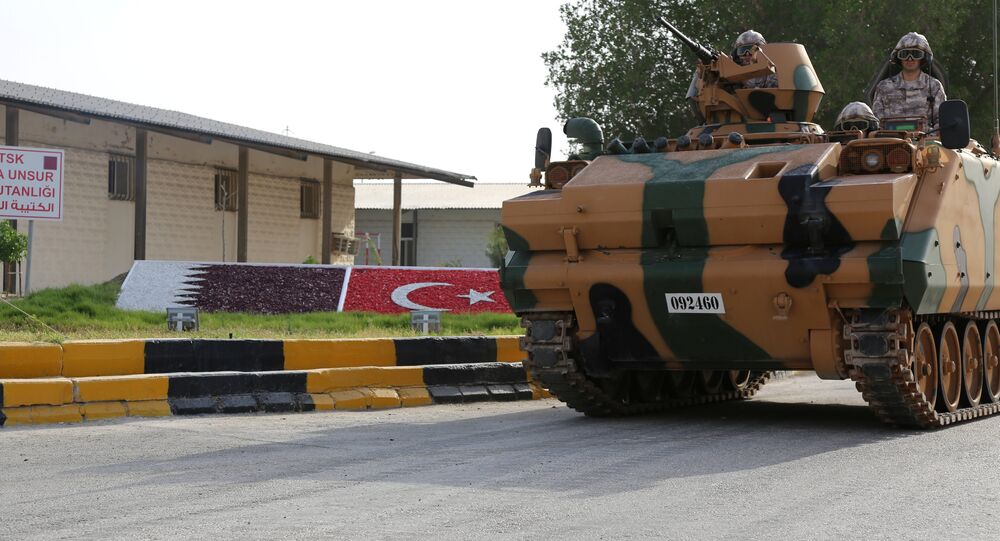 Ankara's decision to send a group of Turkish servicemen to a Qatari base is the wrong move because it was not caused by a real threat to Turkey's security and does not reflect the country's national interests, Turkish political analyst Murat Bilhan told Sputnik.

© Sputnik / Andrey Stenin
Turkey Could Be 'Next Target' After Qatar in Gulf Diplomatic Crisis
Speaking to Sputnik Turkey, Murat Bilhan, vice president of the Turkish Analytical Center for Strategic Studies of Asia (TASAM), described the deployment of Turkish soldiers a Qatari base as the wrong step because it was not caused by a real threat to Ankara's security and does not meet Turkey's national interests.

Late last week, the first batch of Turkish troops arrived in Qatar for a joint military drill, according to the Qatari Defense Ministry.

The deployment came after Turkey and Qatar signed a joint defense agreement which specifically stipulates Ankara setting up a military base in this Gulf country.

Commenting on the issue, Murat Bilhan said that he is, "in principle, against the Turkish military being deployed in Qatar, just like it was earlier the case with Lebanon."

"After all, the deployment of our military there is only permissible if we receive very significant benefits or set the goal of destroying a threat to our national interests," he said.

"The purpose of sending the [Turkish] military [to other country] is of importance. The military can conduct cross-border exercises, if their main task is to ensure the security of their country. They can even launch strikes at terrorist elements that pose a threat to Turkey's security. However, in the case of Qatar, personally I cannot understand what specific benefits Turkey can make," Bilhan added.

He pointed out that "by deploying its soldiers to other Middle Eastern countries, Turkey should take into account the factor of fragility related to the alliances created in the region."

He said that "currently, Qatar and Iran are getting along well," but that "one should not rely on it as a permanent parameter."

The vanguard of Turkish troops arrived in #Qatar on June 18, @AJArabic. #Turkey is marching ahead w/ its plans. https://t.co/uRe8b2OPqq pic.twitter.com/c8ZDQh79hn

"Qatar, which is in confrontation with most of the countries of the Persian Gulf, is forced to maintain cooperation with Iran, which controls the Strait of Hormuz and the supply of natural gas from Qatar," according to Bilhan.

"Meanwhile, the presence of the Turkish military on a permanent basis in the region forces Ankara to become a party to the possible conflict, which every minute may arise between Iran and the Gulf countries, or Iran and Qatar," Bilhan concluded.

According to Turkish Ambassador to Qatar Ahmet Demirok, about 3,000 soldiers of the ground forces, servicemen of the country's air forces and navy, as well as instructors and special forces, will be deployed on the base in Qatar.

© CC0
'If Qatar Loses Its Clout in the Middle East, So Will Turkey'
On June 5, Saudi Arabia, Bahrain, the United Arab Emirates and Egypt cut diplomatic ties with Qatar and embargoed all sea, air and land traffic to the country, accusing Doha of supporting terrorists and destabilizing the Middle East, and several other states of the region reduced diplomatic relations with the country.

On June 6, Turkish President Recep Tayyip Erdogan said that Turkey would continue to develop relations with Qatar and will make efforts to resolve the crisis through dialogue.

Shortly after, Erdogan approved legislation allowing the deployment of Turkish troops to Qatar amid the ongoing diplomatic crisis between Doha and other Arab states and said he had not witnessed Doha backing terrorism.