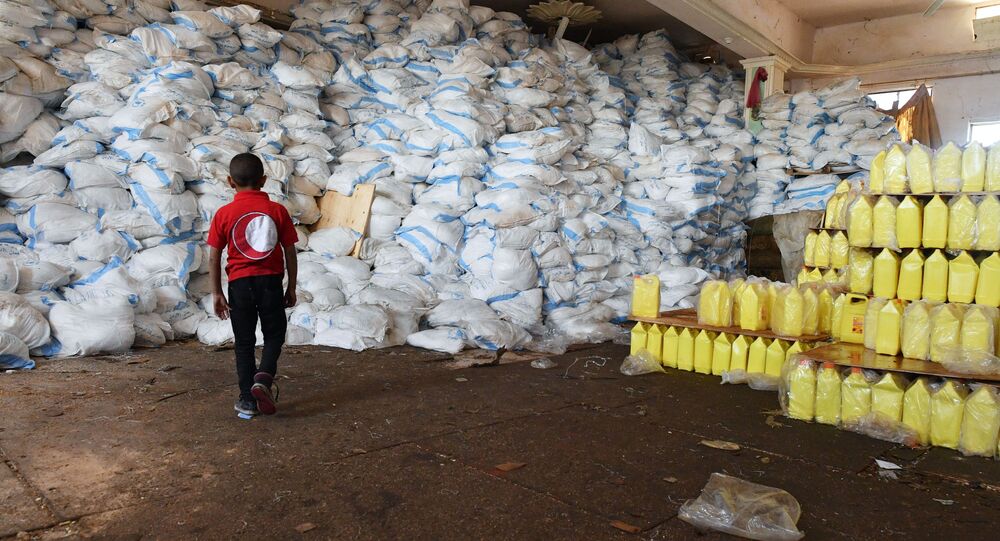 Inter-agency humanitarian convoy successfully delivered aid to besieged East Harasta in Syria after an attempted delivery on Saturday was attacked, Office of the Spokesman of the UN Secretary-General told Sputnik on Monday.

UNITED NATIONS (Sputnik) — Syria has been torn by war for over six years. Despite the efforts of the Syrian government, Russia and international humanitarian organizations, the humanitarian crisis is claiming hundreds of lives every week.

"The UN, Syrian Arab Red Crescent, and the International Committee of the Red Cross are delivering humanitarian assistance to besieged East Harasta today, providing life-saving assistance for 11,000 people in need," the Office said. "The delivery comes two days after a UN/SARC/ICRC convoy attempted to deliver assistance on 17 June, but after multiple delays were forced to turn around without entering into East Harasta. As the convoy began its return to Damascus, a SARC driver was shot."

The wounded driver later underwent surgery, another convoy driver was grazed by a bullet and sustained minor injuries. The UN condemned the attack.

Spokesman's office also said that during the approval and loading process surgical items were removed from the convoy and some medicine and medical materials were reduced in quantity.

Initially, the United Nations requested to deliver aid to 33,000 people in East Harasta, Misraba and Modira, but received permission to reach only 11,000 in East Harasta.

Russia has been carrying out regular humanitarian aid deliveries to Syria, as well as conducting an aerial operation against numerous terrorists groups operating in the country.

Russia's military delivered tons of relief aid to villages in western Syria that is home to thousands of displaced people, to the civilians of Aleppo, Latakia and Quneitra provinces.