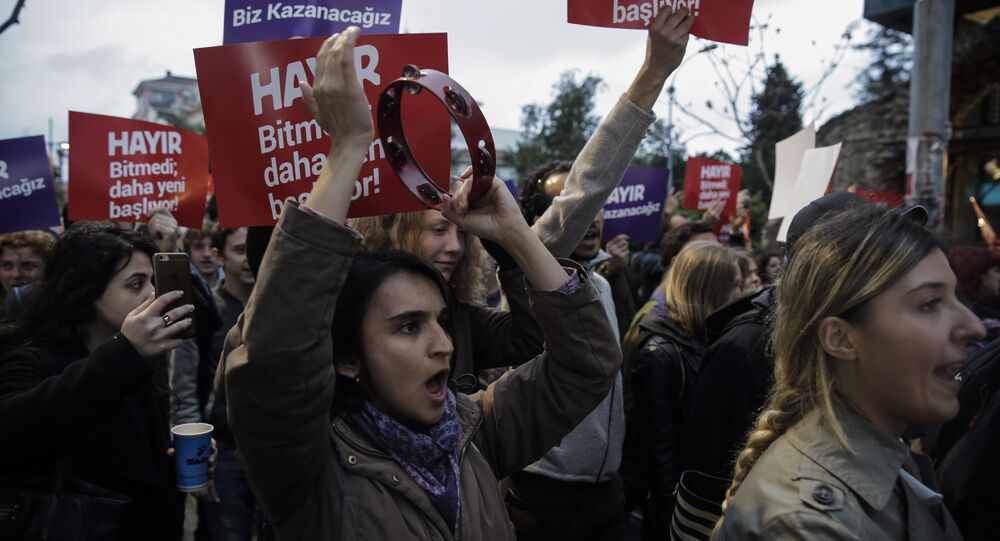 Nearly 50 people have been detained by police in Turkey amid rallies against the result of Sunday's constitutional referendum to broaden presidential powers.

MOSCOW (Sputnik) — Turkish President Recep Tayyip Erdogan called victory on Sunday after 51.4 percent of Turkish voters backed switching to a presidential system and vesting the president with powers to appoint top judges, declare a state of emergency, dismiss the parliament, remain party leader while in power and serve extra terms. Opposition parties slammed the election commission for accepting unsealed ballots and pointed to conduct irregularities before appealing to cancel the result. International observers said the referendum was not up to standard, calling the government out on biased media coverage as well as the lack of freedom of information and independent oversight.

© REUTERS / Murad Sezer
Referendum Allows Erdogan to Transform Turkey Into 'Islamist Autocracy'
At least 49 people, nearly half of these in the Aegean coastal city of Izmir, were detained on Monday after holding unauthorized rallies and allegedly insulting state officials, the Hurriyet Daily News newspaper reported on Tuesday.

In Izmir, six people were detained when a group of protesters intercepted a vehicle carrying "yes" voters, while another group of 19 people was detained in an unauthorized student demonstration in another part of the city.

Another 14 people were held in the Mediterranean Antalya province when dozens of people gathered to protest the impending presidential republic. Another ten people were detained in the central Eskisehir province, according to the publication. Many protests were dispersed using water cannons and tear gas.

The rallies' geography largely corresponded with Sunday's voting patterns. Turkey's central provinces showed the biggest level of support, while the European part of Turkey, as well as the Aegean Sea coast and the Kurdish-dominated areas showed the lowest support for the changes.