US, NATO Allies Continue to Ignore Slaughter of Civilians in Yemen - Ex-Diplomat

Retired Canadian diplomat Patrick Armstrong says that while the US government threatens military action against Syria, Washington and its NATO allies continue to ignore the ongoing killing of thousands of innocent civilians in Yemen.

WASHINGTON (Sputnik) — While the US government threatens military action against Syria, Washington and its NATO allies continue to ignore the ongoing killing of thousands of innocent civilians in Yemen, retired Canadian diplomat Patrick Armstrong told Sputnik.

"Of all the events ignored by the Western media conglomerate, the two-year-old war in Yemen is probably the most important," Armstrong said. "Quite why this war is being fought, nobody can say. Nonetheless practically everybody in NATO is involved in supporting it."

In January, the United Nations top humanitarian aid official in Yemen said the civilian death toll in the nearly two-year conflict there had reached 10,000 with another 40,000 wounded, according to media reports.

Office for the Coordination of Humanitarian Affairs (OCHA) official Jamie McGoldrick said the total number of casualties could be larger. McGoldrick also warned that 10 million people in Yemen were in need of urgent assistance. 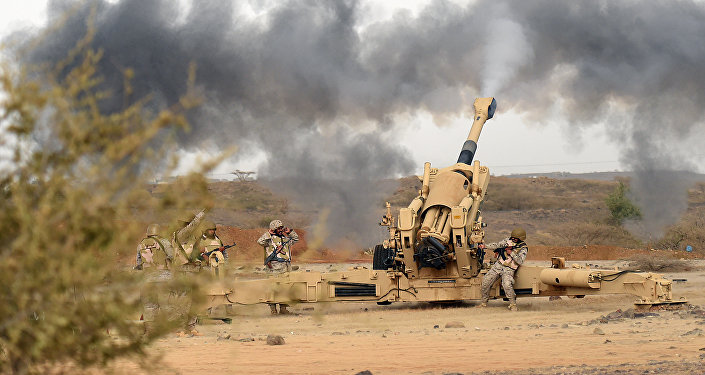 © AFP 2019 / FAYEZ NURELDINE
Increased US Support for Saudis in Yemen Could Create Famine Threat to Millions
Armstrong pointed out that the US government continued to supply Saudi Arabia and its Gulf Arab allies with advanced weaponry for their continued air strikes in Yemen and that other leading NATO allies we remaking lucrative arms sales too.

Since March 2015, Saudi Arabia has led a coalition of mostly Persian Gulf Arab states that is conducting an air campaign in Yemen on the invitation of President Abd Rabbuh Mansour Hadi and against Houthi rebels.

"The US attacks with drones and assists the Saudi war, Canada sells weapons; France, Germany, Italy and the United Kingdom as well," Armstrong said.

Despite campaigning on a promise of pulling the United States out of needless, endless and expensive Middle East conflicts, President Donald Trump had made no move reduce the US support for the Saudis and their allies in Yemen since he took office, Armstrong pointed out.

"Unfortunately, despite its statements of doing things differently, the Trump Administration has not stepped away from involvement. And so we all, for some reason or other, support those killing people and smashing up Yemen's meagre infrastructure," he said.

The US and western European mainstream news media continued to largely ignore the growing human suffering from their countries’ arms exports to the Saudis and the Gulf emirates that constitute the coalition acting in Yemen, Armstrong pointed out.

© AP Photo / Hani Mohammed
Moscow Reaffirms Support of Resumption of Peace Talks in Yemen
"Mentioning the war at all would distract attention from the agendas that periodically dominate the ‘news cycles,’ quite mysteriously all at the same time — one anti-Putin demonstrator is apparently more newsworthy than ten thousand Yemenis," Armstrong said.

Continued US and NATO support for the Sanaa government and its Saudi and Gulf Arab allies was causing a humanitarian disaster and would backfire on its perpetrators, Armstrong warned.

"The end result will be another country destroyed in a NATO-supported ‘stabilization’ campaign. [There will be] more jihadists, more hatred of the West and more scorn for its ‘values’," he predicted.

Patrick Armstrong is a specialist on the Soviet Union and Russia and served as political counselor in the Canadian Embassy in Moscow.