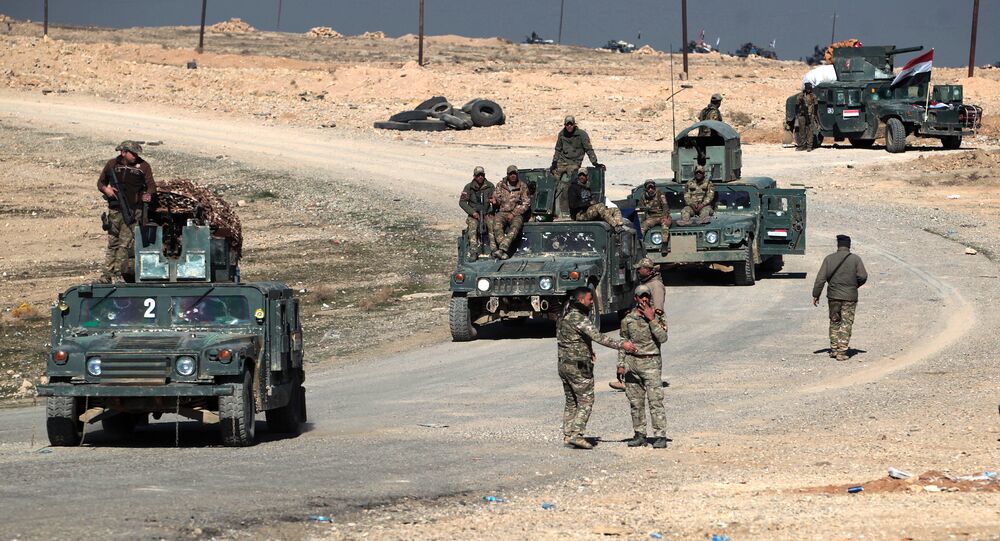 US-led coalition forces have failed to provide air cover in areas where the Iraqi military and the Popular Mobilization Units (PMU), also known as al-Hashd al-Shaabi, have conducted a joint operation aimed at pushing Daesh out of Mosul, Ali Ebu Tahir, a Turkmen commander with the PMF, told Sputnik Turkey.

"Coalition planes have not provided aerial support in the areas where al-Hashd al-Shaabi forces taking part in the Mosul operation are located. They have been active only in those regions where Peshmerga and Iraqi troops are present. We have only received support from aircraft operated by government forces," he said.

Baghdad launched a large-scale campaign aimed at liberating Mosul, the second largest city in the country, in October, taking control of eastern Mosul in January. A month later, Iraqi authorities kick-started the second phase of the operation meant to push Daesh out of western Mosul.

"The Iraqi Armed Forces and al-Hashd al-Shaabi are trying to liberate western Mosul from Daesh. We have conducted a joint operation. We have managed to take control of two districts near the airport, Saha Teyran and Partmanlar. We are determined to free other neighborhoods," the commander said.

© REUTERS / Khalid al Mousily
Iraqi Forces Liberate Mosul Police Department From Daesh
"Western Mosul has a large area which comprises 50 districts. It is very hard to carry out combat activities in this area since these old neighborhoods have narrow streets and blind alleys. Civilians continue leaving the city. However, some residents still stay in their homes," he explained.

The commander added that Daesh has sustained heavy losses in recent fighting, saying that Iraqi security forces and the Popular Mobilization Units have managed to detain many militants.

Baghdad-led forces appear to have also set their eyes on Tal Afar, with Ali Ebu Tahir saying that the city located 63 kilometers (39 miles) would be the next target once Mosul is fully liberated. Tal Afar has been under Daesh's control since June 16, 2014.