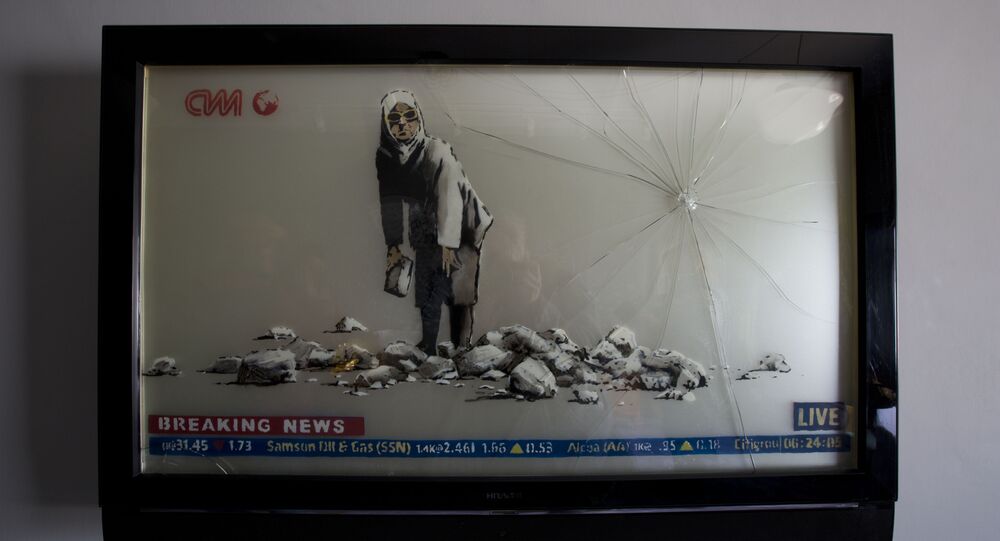 Secretive British graffiti artist Banksy has opened a hotel with "the worst view in the world" next to the Israeli separation wall in Bethlehem.

"Walls are hot right now, but I was into them long before [Donald] Trump made it cool," Banksy said in a statement.

The nine-room "Walled Off Hotel" is not an art stunt, but a real business venture, the artist insists. "It's a genuine art hotel with fully functioning ensuite facilities and limited car parking," Banksy's website explains. "Operated by the local community, we offer a warm welcome to everyone from all sides of the conflict and across the world."

It also sits feet from the more than 320-mile security wall (or apartheid wall) that Israel began building in 2002 roughly along the border with the West Bank and occasionally making deep cuts into Palestinian territory. Its windows look out onto concrete slabs or illegal Israeli settlements visible in the distance.

The hotel, naturally, is full of Banksy originals and interactive exhibits, and will host exhibitions by Palestinian artists. The entire project was pulled together in utter secrecy over 14 months, and surprised even Palestinian officials when its doors opened suddenly March 3, the Telegraph reports.

Although Israelis are officially forbidden from entering Palestinian Authority-controlled areas in the West Bank, among them Bethlehem, the hotel sits in an area just outside the city, and under Israeli military control. So while it is legal for Israelis to stay there, all roads to the hotel pass through Palestinian-controlled territory, making it an illegal journey, the Guardian points out.

But Banksy has a history of bringing crowds to difficult places: his "Dismaland" show drew more than 150,000 visitors to the nondescript seaside English town of Weston-super-Mare, boosting its economy by 20 million pounds over just a month, according to the BBC.

He's even already a draw at the wall: his series of 2005 stencils on the wall, including famous images like a young girl being carried over the wall by balloons, a ladder and a window with a view of mountains, as well as a series of paintings done in Bethlehem in 2007, bring graffiti-hunters from around the world.

Banksy said in 2005 that he considered the wall illegal and that it turned Palestine into a prison.

The hotel, which according to his website will operate for a year (or longer, if they continue to have guests), was erected to mark 100 years since Britain launched a century of confusion in the region, the website says. With the Balfour declaration in 1917, the country's foreign secretary expressed his government's support for the creation of a Jewish homeland in Palestine.

"It's exactly 100 years since Britain took control of Palestine and started rearranging the furniture — with chaotic results," Banksy said, according to the Guardian. "I don't know why, but it felt like a good time to reflect on what happens when the United Kingdom makes a huge political decision without fully comprehending the consequences."

Housed in a former pottery workshop, the hotel sets a dystopic colonial theme, with luxurious, if bullet-scarred, fixtures. Classical busts are wreathed in tear gas, beach scenes do not omit life jackets discarded by fleeing refugees.

But the hotel is not intended to be divisive, its manager says.

"I would like to invite everyone to come here, invite Israeli civilians to come visit us here," Salsah told the Guardian. "We want them to learn more about us, because when they know us it will break down the stereotypes and things will change."

"Is it anti-Semitic," a rhetorical question on Banksy's website asks.

"Definitely not. The Walled Off Hotel is an entirely independent leisure facility set up and financed by Banksy. It is not aligned to any political movement or pressure group. The aim is to tell the story of the wall from every side and give visitors the opportunity to discover it for themselves. We offer an especially warm welcome to young Israelis. Absolutely no fanaticism is permitted on the premises."