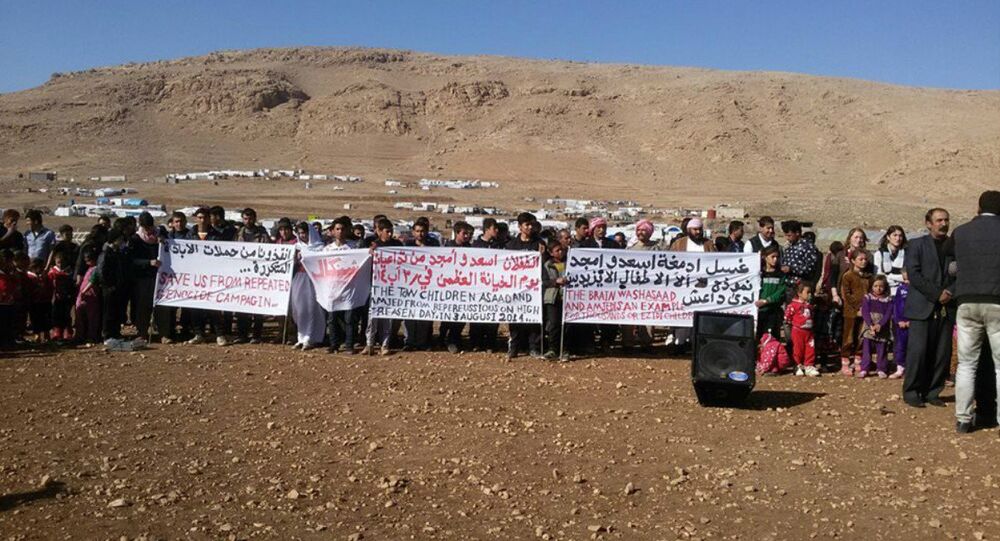 Yazidi refugees currently residing in a camp at Sinjar Mountains in Iraq held a protest rally in order to raise awareness about Daesh terrorists enslaving their children and using them as suicide bombers.

© AFP 2020 / Safin Hamed
Tragic Fate of Yazidi Children Forced to be Suicide Bombers by Daesh
The rally was held following a suicide bombing in Mosul that was perpetrated by Daesh child converts – two young Yazidi boys named Amjad and Asaad.

Many of the Yazidis participating in the rally have had their children kidnapped by Daesh; the grieving parents have no idea whether their sons and daughters are alive or dead, or whether they became slaves or Daesh converts.

The participants of the rally called on the Iraqi government and international organizations to help rescue their kidnapped sons and daughters. The assembled people fear that Daesh terrorists may brainwash their enslaved children and use them as disposable tools to commit more suicide attacks like the one in Mosul.

"Save the thousands (of our children)," the rally participants chanted in hoarse voices.

The Iraqi city of Sinjar was captured by Daesh terrorists early in August 2014. The terrorists have slaughtered thousands of the city's Yazidi residents, and enslaved approximately 5-7 thousand Yazidi women and children.