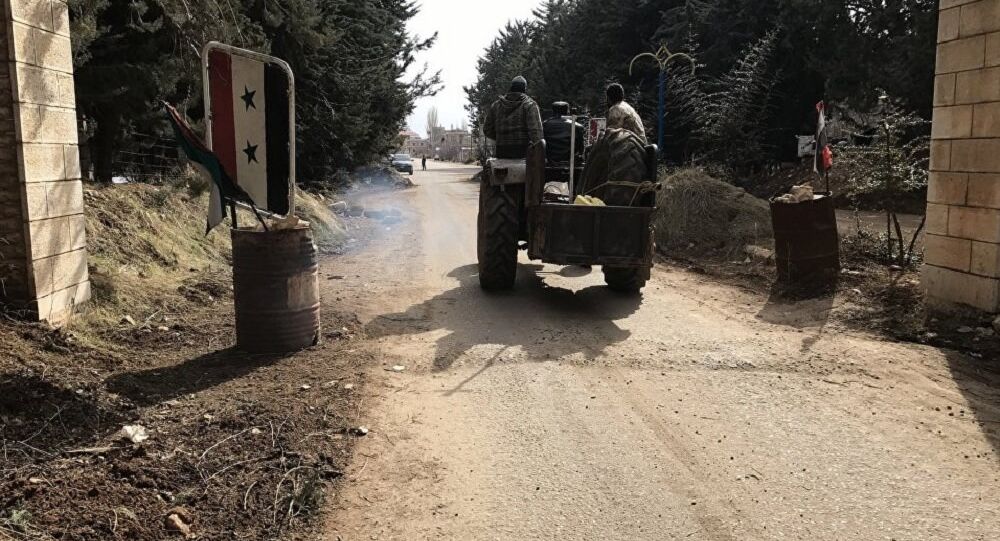 In December, the Syrian government and armed opposition groups reached an agreement on a nationwide ceasefire in Syria and expressed their readiness to start peace talks.

© REUTERS / Omar Sanadiki
A Look at Assad's Syria Following Nearly Six Years of Crisis
Step by step, the ongoing negotiations are pointing a way toward a more peaceful Syria, with many country's militias surrendering their arms and giving up the fight in a hope for a better and secure future.

Serghaya, located near Damascus, has become one of the Syrian towns which has moved a step closer to a peaceful future. Sputnik correspondent Mikhail Alladdin became one of the few foreign journalists who witnessed the process of reconciliation in the town and shared his impressions.

The town has always been considered by Syrians as one of the most popular holiday resorts. While the country lived in peace, many Syrians came to the town in summer to hide from the sweltering heat, the journalist wrote.

Now, a huge number of destroyed restaurants and hotels remind of happy times in the past. But who knows, maybe the country's residents will again head to the town to enjoy local hospitality and nature.

The reconciliation process gives local residents much hope for a brighter future.

"Sergaya has been completely liberated. The city was under control of militant groups that kept the inhabitants of the town hostage. Now, according to the agreement, these militants left the town and the Syrian army regained control over it," governor of the Damascus province Alaa Ibrahim told Sputnik.

On February 5, Syrian President Bashar al-Assad has once again extended a decree on amnesty to all those who will voluntarily surrender their arms and stop fighting. The decree applied to all fighters with the exception of al-Nusra Front and Daesh terrorists and played a crucial role in the process of reconciliation.

Plans for the Future

Since 2011, Syria has been engulfed in a civil war, with government forces fighting against numerous opposition and terrorist groups. Now, many people who took part in the fighting are dreaming of the time when the war is over and share their plans for the post-war future.

"When everything started, we feared for our families so much, that we decided to take up arms to defend our town. Only years later, we realized that the decision to join the Free Syrian Army was a big, five-year long mistake. Out town has become a lure for al-Nusra Front and Daesh terrorists," one of the former fighters told Sputnik.

Local authorities hope that as result of the peace talks and the reconciliation process in Syria, the whole Damascus region will be liberated in the foreseeable future.

Hopefully, Syrian citizens, as well as the residents of other countries, will soon be able to come to the area for vacation, try Serghaya's delicious fruits, enjoy the beautiful landscape and the hospitality of the locals.