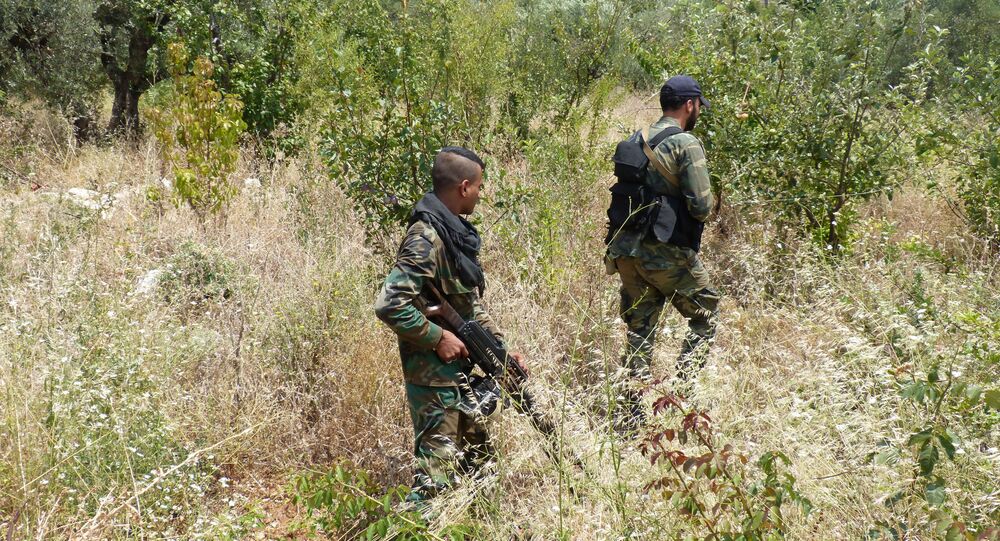 Not One Step Back! Syrian Army Battles Terrorists in Latakia Mountains (VIDEO)

Despite the difficult terrain and limited visibility, Syrian forces deployed in the mountains of Latakia province continue to hold the line against Nusra Front terrorists.

The mountainous east of Latakia province in northwest Syria are considered one of the most difficult theaters of the Syrian conflict: rough terrain and poor visibility in areas adjacent to Hama and Idlib provinces have helped terrorists mount attacks against the Syrian army's defensive positions in the region.

© REUTERS / Hosam Katan
Al-Nusra Front Terrorists Attack UN Aid Convoy With Mortars, Machine-Guns in Syria
Recently the terrorists mounted a string of brazen assaults in the vicinity of the village of Kansabba, and Hasan al Rai and ak Kalaa elevations. Their efforts however were in vain, as the Syrian army continues to stalwartly hold the line against enemy forces.

A Syrian army colonel told Sputnik Arabic that the military managed to successfully repel attacks launched by dozens of al-Nusra Front terrorists. The first attack took place near the village of al-Tuffahia, while the second was carried out from the town of Kabbani – Rashu elevation line.

According to the colonel, during fighting the Syrian army carried out artillery strikes along the conflict line and against enemy reinforcements arriving from Idlib, with scores of terrorists killed during the shelling and direct clashes.

The colonel also added that terrorists in the region had violated the ceasefire agreement, which successfully functions in other areas of the country, on a daily basis.