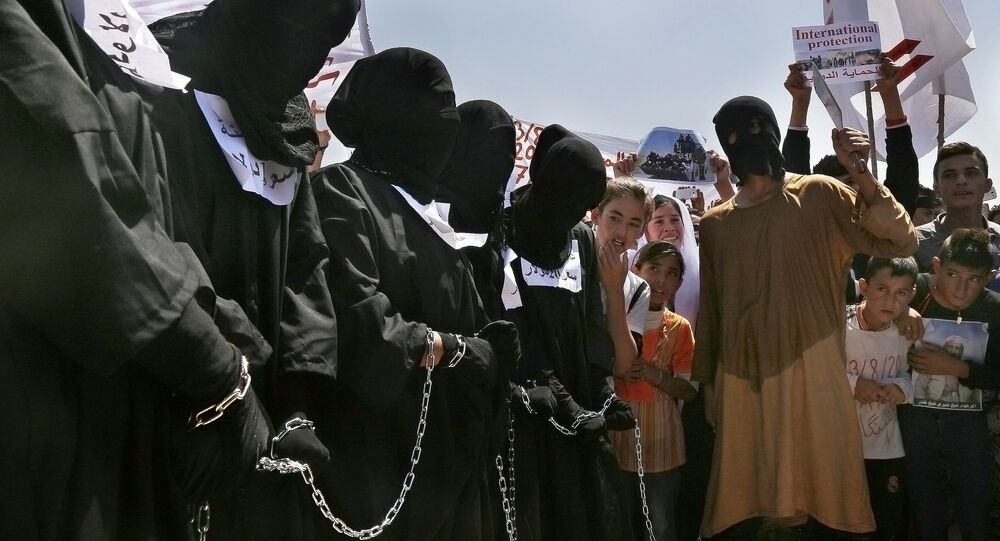 "Little is known about sexual abuse against Sunni Arab women living under ISIS rule… Their care and rehabilitation requires a multifaceted response, with authorities providing the needed medical and psychosocial support and working to stamp out stigma around sexual violence within the wider community," Lama Fakih, deputy Middle East director at Human Rights Watch said.

The watchdog's researchers in January 2017 conducted interviews with a number of women, who had escaped from the Daesh-held town of Hawija, Iraq, to Kirkuk. Four of the interviewees said they had been detained by Daesh in 2016, for periods between three days and a month. The interviews revealed cases of destruction of property, physical violence, forced marriage and sexual abuse.

© AP Photo / Khalid Mohammed
Yazidi Women Released From Daesh Sex Slavery in Iraq
The watchdog noted that experts from international organizations working with survivors of sexual assault in northern Iraq attribute the lack of knowledge regarding the prevalence of Daesh gender-based violence to stigmatization of victims.

According to the experts, available psychosocial or mental health support services also continue to exceed the needs.

Human Rights Watch has urged the Kurdistan Regional Government (KRG), the Iraqi central government, UN agencies and international humanitarian groups to provide a coordinated response in assisting the survivors of violence. The organization added that coordination efforts should include the World Health Organization (WHO) and representatives of the survivors.

The Daesh, a Sunni terrorist organization and former affiliate of al-Qaeda, emerged in Iraq and has captured vast areas in the country and in neighboring Syria since 2014. The radical group has become notorious for its brutal acts of terrorism and human rights atrocities.