A fighter jet under the command of a Saudi-led military coalition killed nine women and one child attending a memorial service in a Thursday airstrike in Yemen.

Mourners were meeting outside a house in the Arhab district of Sanaa, the Yemeni capital, when the warplanes launched an airstrike. The individuals were grieving the death of a local woman who died Wednesday in an airstrike in Ashia, a village north of Sanaa. In addition to the ten casualties, dozens more were injured. 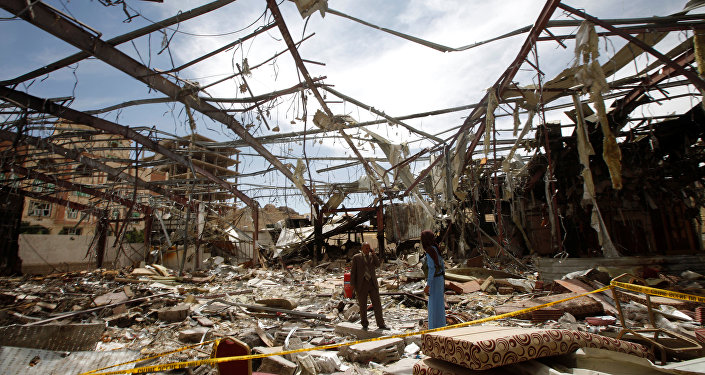 "People heard the sound of planes and started running from the house but then the bombs hit the house directly," an Arhab resident said. "The roof collapsed. Blood was everywhere," the witness added.

The intended target is believed to have been the residence of Mohammad al-Nakaya, a local leader affiliated with the armed Houthi political opposition faction. An image from local media outlets shows a man kneeling in the dust of the wreckage holding the body of an elderly woman. The photos have yet to be verified for authenticity.

A coalition statement indicated, "we are aware of media reports that Houthi rebels are claiming that Yemeni civilians were killed in an air raid overnight near Sanna. There has been fighting between Yemeni armed forces and rebels in this area in recent days." Officials "are investigating the reports," the statement added.

In October 2016, Saudi warplanes dropped bombs on people attending a funeral. The UN estimated that at least 140 casualties were inflicted from the incident, while some 540 were injured. An internal investigation concluded that pilots were given incorrect coordinates for the attack, which the coalition said was intended for Houthi military leaders.

The civil war and quest for sovereignty in Yemen has killed at least 10,000 people, while millions have been displaced, the India Times said.