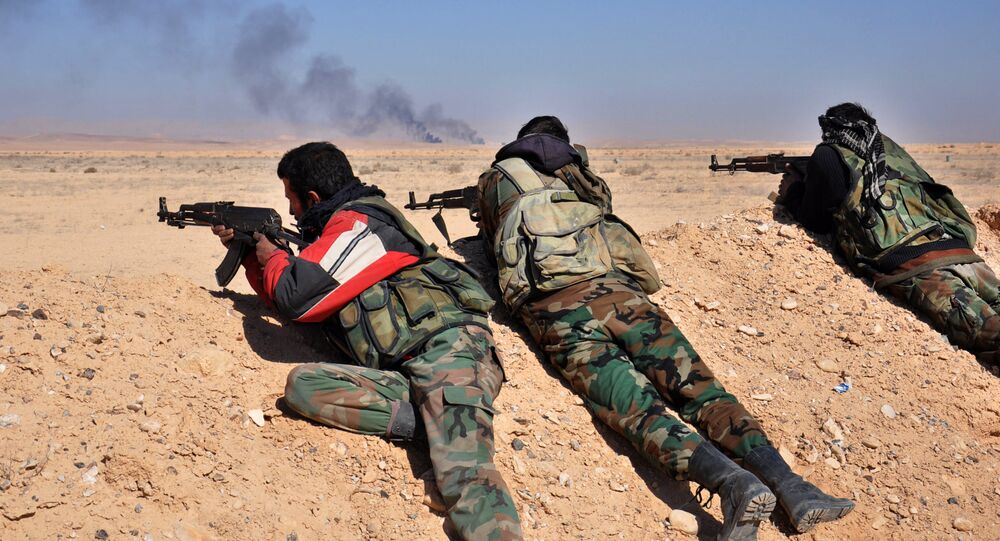 The Retaking of Palmyra From Daesh Will be 'Swift and Rapid'

Amid recent Syrian army advances, supported by the air force and militias, near the Daesh-held Syrian city of Palmyra, Russian military experts explain why the second liberation of the city should happen relatively quickly.

The Syrian army units and forces allied with the government have reached the western outskirts of the city. Through the last week they have eliminated over 200 Daesh rebels and over 40 of their military vehicles, the Russian newspaper Izvestiya reported on Tuesday.

Russian Aerospace Forces have conducted over 90 sorties in support of the offensive. Meanwhile, the US-led coalition has delivered over twenty airstrikes. Military and defense analysts suggest that the self-proclaimed Caliphate simply does not have enough of a combat force to rebuff an assault on Palmyra.

Local media report that the Syrian army units, advancing from Homs along the M20 highway, are rapidly approaching the western outskirts of Palmyra. The pace of the offensive is very high: before the weekend, the fighting was 40 kilometers away from the city; by Monday it has already moved 20 kilometers closer.

The advancing troops have applied similar tactics to those used by Daesh during the repeated attack on the city back in December.

High-mobility groups on off-road vehicles with heavy machine guns and nonrecoiling guns mounted on them are sent forward. They eliminate small groups of militants while directing aircraft and artillery to the larger targets.

© Sputnik / Mikhail Voskresenskiy
Palmyra in Sight: Less Than 20Km Separate Russia-Backed Syrian Army and Ancient City
The extremists, however, are fighting back: to slow down the advance of the government army, they blow up gas fields and pipelines and set them on fire to the west of Palmyra.

T4 Military Airport, which is located half-way between Palmyra and Homs, serves as the base of the anti-terrorist operation.  The Fifth Legion of volunteers, which was formed back in November, operates as the largest combat force, and works together with regular units of the Syrian army, Shia militia and the units of the Lebanese Shia movement Hezbollah.

According to the local media, the above units have recently been reinforced by thousands of Syrian servicemen from coastal provinces. Russian military advisers are reportedly working with the general staff of the Fifth Legion and Russian aircraft and helicopters provide aerial support to the advancing troops.

Russian military expert Ivan Konovalov, Director of the Center for Strategic Trends Studies, explained why the second liberation of the city promises to be a rapid one.

"The Daesh forces are limited and are spread throughout vast territories. If back in December there were up to 5,000 radicals participating in the attack on the city, now there are barely 1,000," he told Izvestiya.

He further explained that Palmyra does not bear similar strategic significance to the self-proclaimed Caliphate as, for example, al-Bab. The jihadists won't try to defend it at any cost. Their major forces are fighting near al-Bab, Deir ez-Zor and Raqqa.

© REUTERS / Satellite Imagery Analysis by UNITAR-UNOSAT/DigitalGlobe
Moscow Hopes Ancient Palmyra to Be Liberated From 'Barbarians-Terrorists'
The expert also doubted that an assault on Palmyra would be anything like the liberation of Aleppo.

"It is not as large as Aleppo, therefore there won't be large-scale street fighting. Instead it will be more of a war of maneuverability," he suggested.

However Konovalov further said that the result of the assault will depend more on the experience of commanders and work of intelligence rather than on the size of the respective forces.

"The aerial support will also play a major role during the war to maneuver in the desert, targeting and eliminating high-mobility groups of terrorists," he concluded.