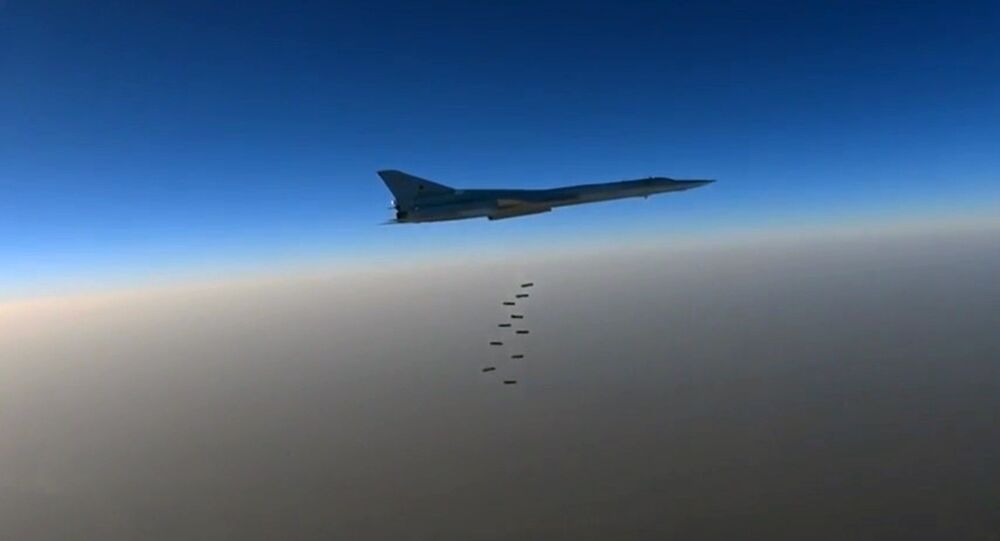 © Photo : Ministry of defence of the Russian Federation
'We Did Not See Any Western Humanitarian Organizations' in Eastern Aleppo
MOSCOW (Sputnik) — Russia has stated repeatedly that its aviation only targets terrorists in Syria. In October 2016, Russian Foreign Ministry spokeswoman Maria Zakharova said that no proof, such as satellite data, geolocation or other evidence, was given to back up the claim that Russia targeted civilians. The Russian Defense Ministry has stressed that it carefully verifies the reconnaissance data and targets only terrorists.

The report, titled "Breaking Aleppo," said that hospitals and residential areas were hit in Aleppo and cluster bombs, incendiaries and chemical weapons were used.

"Throughout the final months of 2016, dozens of attacks on hospitals and clinics in opposition controlled parts of Aleppo were reported," the report said.

© Sputnik / Said Tsarnaev
Chechen Leader Kadyrov Announces Documentary About Republic's Servicemen in Syrian Aleppo
According to the figures used by the Atlantic Council, 400 attacks against medical facilities were carried out in Syria between 2011 and July 2016, "the vast majority being by Russian and Syrian government forces."

"The indiscriminate strikes were not one-sided; armed opposition groups also engaged in rocket attacks on civilians in western, government-held Aleppo," the report said.

The US-based research center suggested that the Russian Ministry of Defense used "deceptive imagery" in its denials of attacks on hospitals.

"This misinterpretation of satellite and aerial imagery by the Russian MoD has been a frequent occurrence, both in the conflict in Syria and previously," the report said.

The Atlantic Council report included the data from the Syrian Civil Defense group, also known as the White Helmets, which claims to be a rescue service helping Syrians. A number of videos can be found on the Internet which show the members of the groups creating fake rescue videos.

In October 2016, Abdulrahman Al Mawwas, the chief liaison officer of the White Helmets, admitted to RT broadcaster that the organization received funding from several Western states, including the United States, the United Kingdom, Germany and the Netherlands.

Experts told Sputnik that the accusations of the Atlantic Council were not credible.

"Of course, the report of the so-called research center is nonsense. Especially since Russian Aerospace Forces were not even in Syria in 2011. Later, when they arrived, the targets were selected carefully… In the last week, 40 airstrikes were carried out. This means that each airstrike was carefully prepared, with the use of various reconnaissance methods," Alexey Podberezkin, a Russian professor with the Moscow State Institute of International Relations, said.

Today, airstrikes are not carried out blindly, the expert noted.

"Precision-guided munitions used in Syria … are a very accurate weapon system … Every aircraft sortie is a strike on one, maximum two targets, which are determined in advance and have to be approved by the ground command. Striking civilian targets is excluded. In Aleppo, within the city limits, there were no strikes even on military facilities, let alone civilian ones," the expert said.

Podberezkin added that the civilian targets could be struck only when there was a lack of reconnaissance data or when the target changed its position.

"These occurrences are possible, but very rare," Podberezkin said.

© Photo : Vanessa Beeley
Terrorists Shell Eastern Aleppo First Time Since City's Liberation by Syrian Army
According to the expert, the United States often had its drones hit civilian targets, which led to the US media transferring the negative experience to its coverage of Russia.

Konstantin Sivkov, the president of the Academy of Geopolitical Problems based in Moscow, said that the accusations against Russia were part of information war.

"This is very obvious, this is an element of the information war … The goal is clear, to besmirch Russia and Syria," the expert said.

According to Sivkov, the US experts never came to Syria despite being invited for an inspection.