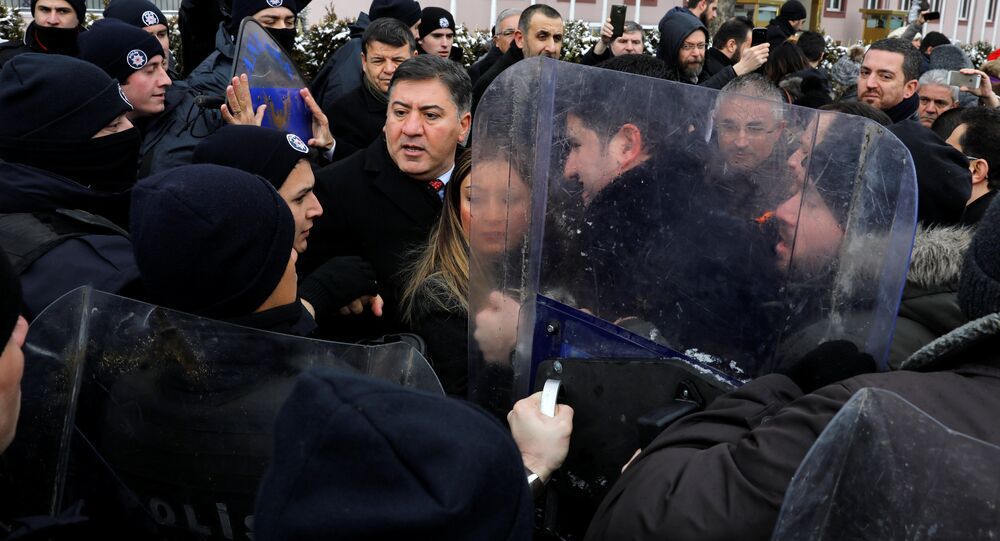 Turkish police are dispersing a crowd of demonstrators protesting near the parliament building in Ankara against constitutional amendments to switch to a presidential system of governance, local media reported Monday.

© REUTERS / Umit Bektas/File
Draft of Turkey's New Constitution to Be Submitted to Parliament Friday - Deputy Prime Minister
ANKARA (Sputnik) — The Turkish parliament is due to discuss the constitutional amendments later in the day. The draft bill was submitted by the ruling Justice and Development Party (AKP) in December.

Police have secured streets leading up to the parliament building and are dispersing groups of protesters attempting to approach the parliament, the Haberturk TV channel reported.

The draft bill will need the approval of at least 330 members of parliament before it can be put to the popular vote in a national referendum. The AKP and the Nationalist Movement Party (MHP) supporting the amendment currently have 355 seats in the parliament.

Turkish police are forcibly dispersing a protest against the presidential reform, in front of the Parliament in Ankara #Turkey pic.twitter.com/hfMTeCN1Mo

According to the Turkish Minute news outlet, police had used teargas, rubber bullets and water cannons to disperse the crowd.

The media outlet added that several lawmakers of the opposition Republican People’s Party (CHP) had also been affected by the police activities.

Earlier in the day, Turkish Deputy Prime Minister Nurettin Canikli said the referendum could take place in early April if the bill passes.

The controversial bill seeks to give President Recep Tayyip Erdogan sweeping powers in a move described as a power-grab by the opposition Republican People's Party and the pro-Kurdish Peoples' Democratic Party.

Draft of Turkey's New Constitution to Be Submitted to Parliament Friday

Turkey Could Hold Referendum on New Constitution in Early Summer 2017