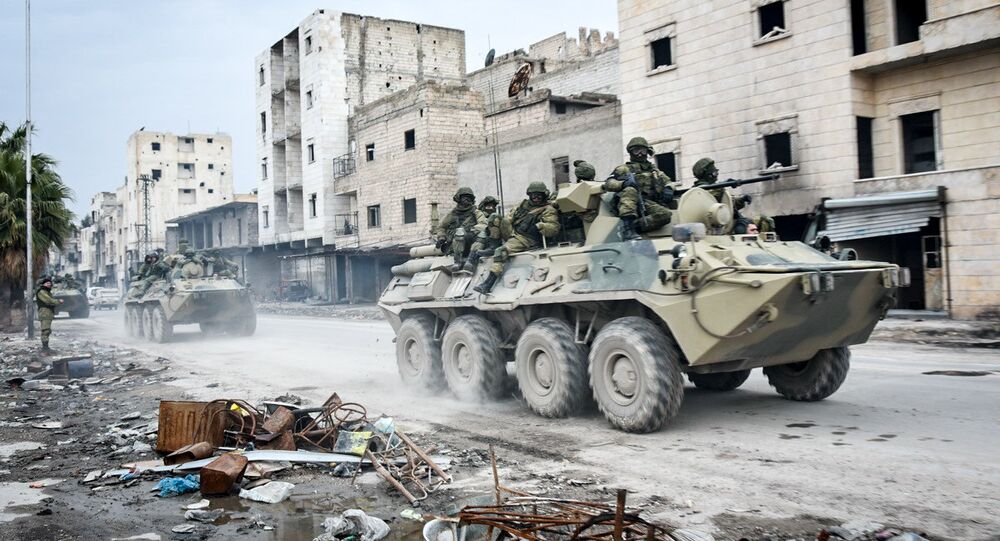 Russia is going to continue its military pullout in Syria after completing a range of objectives and in the wake of the renewed ceasefire in the war-torn country, according to the statement of the Russian Armed Forces General Staff.

MOSCOW (Sputnik) — Russia is starting to further reduce its military presence in Syria after completing a range of objectives and in the wake of the renewed ceasefire in the war-torn country, the Russian Armed Forces General Staff said Friday.

© Sputnik / Dmitriy Vinogradov
Triumph in the Sky: Russia Blankets Syria With S-300, S-400 Air Defense Network
Russia started its anti-terrorist campaign in Syria in September, 2015, following a request by the Syrian government. A number of ceasefire attempts and peace talks have taken place between Syria's warring factions since then. A US-Russian-brokered partial ceasefire was first introduced in early 2016, but violence continued, especially in Aleppo. A second Russian-Turkish-backed ceasefire took effect after the fall of Aleppo's militant-held enclave just before the end of 2016.

The first scaling back of the Russian campaign took place in March, when Russian President Vladimir Putin announced the withdrawal of the bulk of the country's air group from Syria, stating that the mission's aims had been achieved and a chance should be given to diplomacy. A limited force remained and has been active in assisting Syrian forces against terrorists in eastern Syria and in Aleppo.

"In accordance with the decision of Supreme Commander-in-Chief of the Russian Armed Forces Vladimir Putin, the Defense Ministry is beginning to reduce the Armed Forces grouping in Syria," First Deputy Defense Minister Gen. Valery Gerasimov told reporters on Friday.

Gerasimov said the reduction begins with the aircraft carrier Admiral Kuznetsov and the Pyotr Velikiy battlecruiser alongside auxiliary ships. The carrier battle group arrived to the eastern Mediterranean in November after passing through the English Channel and Gibraltar.

© Sputnik / Russian Defence Ministry
Syrian Chief of General Staff Lauds Russian Air Backing in Latest Gov't Victories
The deputy defense minister recalled that the nationwide ceasefire in Syria took effect at midnight local time on December 30 (22:00 GMT on December 29). The decision to cut Russia's military presence in the Arab republic was made by Putin at the recommendation of Defense Minister Sergei Shoigu the day before.

Admiral Kuznetsov is set to be on its way back home to the Russian Northern Fleet's base later in the day, according to Gerasimov. The rest of the naval group will follow the aircraft carrier back to Severomorsk.

The Russian Naval Aviation's carrier battle group in the east Mediterranean described its achievements over the past two months of the campaign.

He stressed that the Admiral Kuznetsov-led group had completed all of its objectives, including the creation of a single air defense system. The system involved setting up interoperability between the Russian Aerospace Forces and the Bastion coastal defense systems on Syrian shores.

© AFP 2021 / GEORGE OURFALIAN
Russia Denies Involvement in Airstrike on Turkish Positions in Syria - Deputy PM
The K-300P Bastion-P mobile anti-ship missile system was deployed to Syria in November. It has also for the first time been used to attack ground targets in Syria. S-300 and S-400 long-range surface-to-air missile systems were deployed the year before to protect Russian facilities in Syria, including the Hmeimim airbase and the Tartus naval logistics facility, which has been in Russian operation since the 1970s.

"A unified air defense system that provides reliable protection both on land and at sea was created jointly with the Russian troops in Syria's air defense forces and means on the basis of the modern S-300 and S-400 systems," Kartapolov said.

The Syrian army praised Russia's role in helping achieve what appears to be a holding ceasefire.

"The support provided by the Russian Aerospace Forces played a major role in these victories, paving the way for a ceasefire agreement and creating the appropriate conditions to launch the Syrian crisis political settlement process," Ayyoub said via videoconference.

The process of political settlement for the crisis is expected to resume early this year. On December 17, Russian President Vladimir Putin and his Turkish counterpart Recep Tayyip Erdogan discussed in a phone call the possibility of a meeting in Kazakhstan's capital Astana between the parties to the Syrian conflict with Russia, Iran and Turkey as potential mediators.

On Wednesday, Turkish Foreign Minister Mevlut Cavusoglu gave additional details on the proposal, stating that the talks may begin on January 23 provided that the ceasefire regime is upheld on the ground. He added that Russian experts are set to arrive to the Turkish capital of Ankara on January 9-10 in preparation for the upcoming Astana talks.

The Astana talks are likely to be followed by the next round of UN-backed talks in Geneva. The intra-Syrian peace talks were supposed to take place in February 2016, but were suspended two days after kicking off. In December 2016, UN Special Envoy for Syria Staffan de Mistura said the United Nations wanted to reconvene the talks on February 8, 2017. Russia has stressed that the Astana and Geneva platforms do not seek to become rivals, but are, rather, complimentary.

© Photo : Ministry of defence of the Russian Federation
First Blood: Russian Aircraft Carrier, Frigate Unleash Hell Upon Terrorists in Syria
16
In Friday's statement, the Syrian general pledged to build on this success to defeat the remaining militant forces and thanked the Russian military on behalf of President Bashar Assad and the people of Syria for their support in fighting terrorism.

"The Syrian people hope to strengthen ties with Russia across all spheres, including military cooperation that should continue between the two countries even after terrorists are defeated," Ayyoub said.

"The successes of the Syrian armed forces in liberating Aleppo created the necessary conditions for the peaceful resolution of the conflict," Gerasimov said.

He added that the nationwide truce agreement that took effect on December 30 served as clear confirmation of the fact.