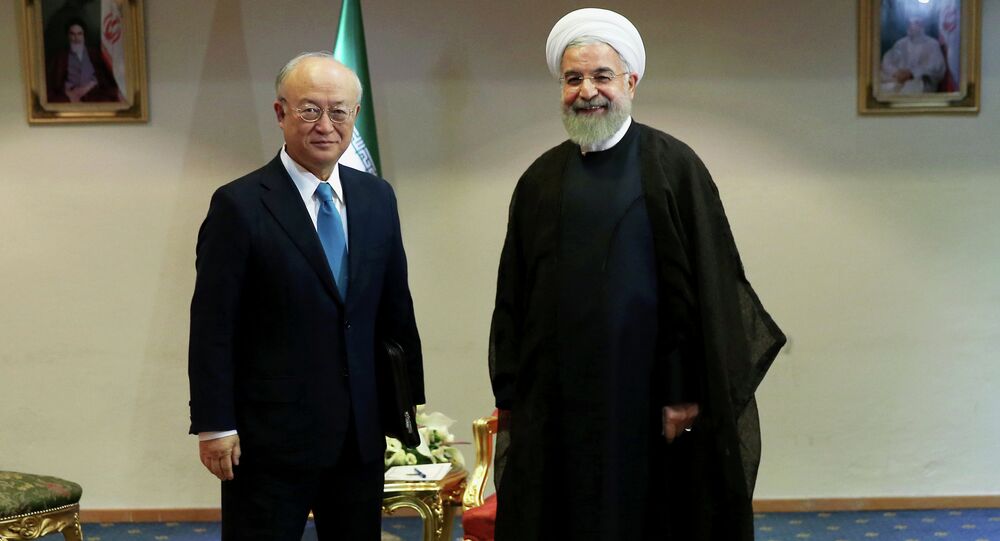 The head of the International Atomic Energy Agency (IAEA) said Iran has shown commitment to its end of the nuclear deal struck last year while visiting Tehran December 18.

Iran has complained about the US extending a sanctions package for another decade. The US says these sanctions are unrelated to the deal; Iran disagrees.

"We are satisfied with the implementation of the [nuclear agreement] and hope that this process will continue," IAEA Director General Yukiya Amano told the press in the Iranian capital, Reuters reports, citing the IRNA news agency.
"Iran has been committed to its engagement so far and this is important," he said.

After the White House said earlier this week that the sanctions bill would become law even without President Barack Obama's signature, Iran requested a meeting of the Joint Comprehensive Plan of Action (JCPOA) commission to discuss the situation and ordered its scientists to start developing nuclear systems to power ships.

Salehi presented the maritime nuclear propulsion project to Amano and said the country would provide more details on it in three months, according to the Islamic Republic News Agency (IRNA). The initial outline did include what is so far the most controversial issue of the project: the level of uranium-enrichment powering the ships will require.

"Normally, the enrichment for such engines is between 5% and 90%. It depends on the type of engine and the time and goal we want to reach," Salehi said, AFP reported.

Under the terms of the current deal, for the next 15 years, Iran is only to enrich uranium to 3.67 percent. According to local media, Salehi assured Amano that the country would adhere to the enrichment terms of the agreement. Amano has not commented specifically on the project.

Amano also met with Iranian President Hassan Rouhani, who said America's actions would erode trust in the word of the US government around the world. US President-elect Donald Trump's threats to tear up the deal are not helping matters.

Rouhani told Amano he hoped Iran and the IAEA would "be able to have good technical cooperation on nuclear propulsion for transport," Reuters reported, citing local media.

He also reiterated after the meeting that his country would "adhere to our commitments and we will not trigger the violation of commitments," according to AFP.

"As long as the other sides remain committed to their commitments in the [nuclear deal], the Islamic Republic of Iran will continue to act on its commitments."

US Intelligence Prevented Gov't From Starting War With Iran, Syria