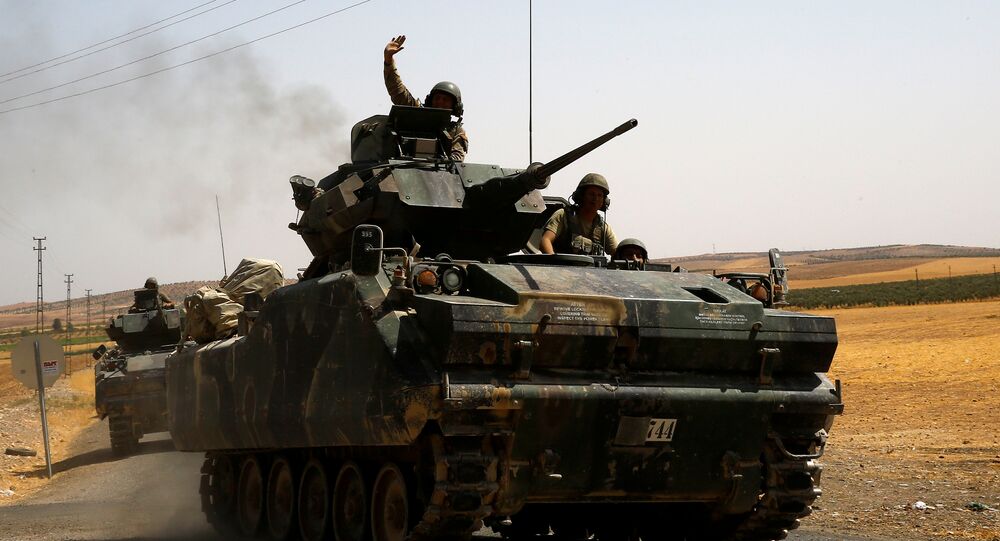 © AFP 2020 / ADEM ALTAN
A Slip of Tongue or Deliberate Plan? True Motives Behind Erdogan's Remark About Toppling Assad
Now, as Syrian government forces retake swathes of eastern Aleppo, threatening to crush the opposition in its most important urban stronghold, Turkish President Erdogan has lashed out at President Assad.

On Tuesday, the Turkish leader revealed the aims of the Euphrates Shield operation.

"Why did we enter? We do not have an eye on Syrian soil. The issue is to provide lands to their real owners. That is to say we are there for the establishment of justice. We entered there to end the rule of the tyrant al-Assad who terrorizes the state. [We didn’t enter] for any other reason," the president said at the first Inter-Parliamentary Jerusalem Platform Symposium in Istanbul.

However on Thursday Recep Tayyip Erdogan changed his rhetoric, claiming that the Turkish military operation in Syria is aimed at "no country or person but only terror organizations."

Turkish Hurryiet Daily News then suggested that such a sharp contrast in the president's rhetoric occurred after his phone conversation with President Putin on the Syrian issue.

"Erdogan is pursuing several aims in Syria," he told Sputnik.

"Apart from the purposes he outlined at the launch of the Euphrates Shield operation, which are the protection of Turkish borders from Daesh and countermeasures against the set-up of the Kurdish belt in the north of Syria, there is one more aim for Ankara's operation, which has been outlined by the pro-government Yeni Şafak newspaper, and that is an annexation of Aleppo as Turkey's 82nd province," he said.

"We could suggest that there might be an agreement reached between the US and Turkey that the US would launch an operation to liberate Raqqa while Turkey would concentrate on Aleppo. Thus the Syrian territory would be split into certain spheres of influence," he added.

The political observer further suggested that Bashar Assad, taking into account the above agreement, has re-oriented the Syrian government forces, which have been moving towards Raqqa, at the city of al-Bab in the Aleppo Governorate, as it is the gates to the city of Aleppo.

© Sputnik / Press-service of Syrian President Bashar al-Assad
Erdogan's Remark About Toppling Assad Prompts Syrian, Russian Reaction
"Thus the advance of the Turkish troops towards al-Bab caused the tactical re-maneuvering of the Syrian army, which took a sweep from Raqqa towards al-Bab," he suggested, commenting on the recent reports that the Syrian army has taken a swift turn from Raqqa and has got very close to al-Bab.

The Turkish troops meanwhile have been forced to suspend their advance towards al-Bab after an attack on their positions.

Hence, Mehmet Ali Güller suggests that al-Bab might lead to an open confrontation between Turkey and Syria. And this might be the reason for Erdogan's recent hostile rhetoric towards President Assad.

The political observer also suggested that Erdogan is also using his foreign policy strategy as a tool in his internal policy to pursue the transition towards the presidential form of power in the country.

"There is a virtual aim that the leading Justice and Development Party (AKP) is laying out to its voters. This aim might be defined as "Syrian Aleppo is 82nd Turkish province, Iraqi Mosul – the 83rd," he said.

© AFP 2020 / LOUAI BESHARA
Ankara 'Should Understand That Syrian Settlement is Impossible Without Assad'
He further suggested that Turkish authorities are trying to peg this aim to transitioning the country towards the presidential form of governing, as they think that they could win the public support of the constitutional reforms following Turkey's victory in the region.

Thus Erdogan is making Aleppo part of his domestic political rhetoric, he explained.

With regards to the Kurdish issue, Güller explained that in order to prevent the set-up of the Kurdish corridor in Syria, Turkey should be "facing militarily at Manbij while politically – at Damascus."

"If Turkey's true aim is to prevent the set-up of a Kurdish corridor in the north of Syria, it should be done not through Al-Bab, but through Manbij, and politically – through Damascus. Without a dialogue between Ankara and Damascus there is no way of preventing Kurdish territorial initiative," the political observer finally stated.