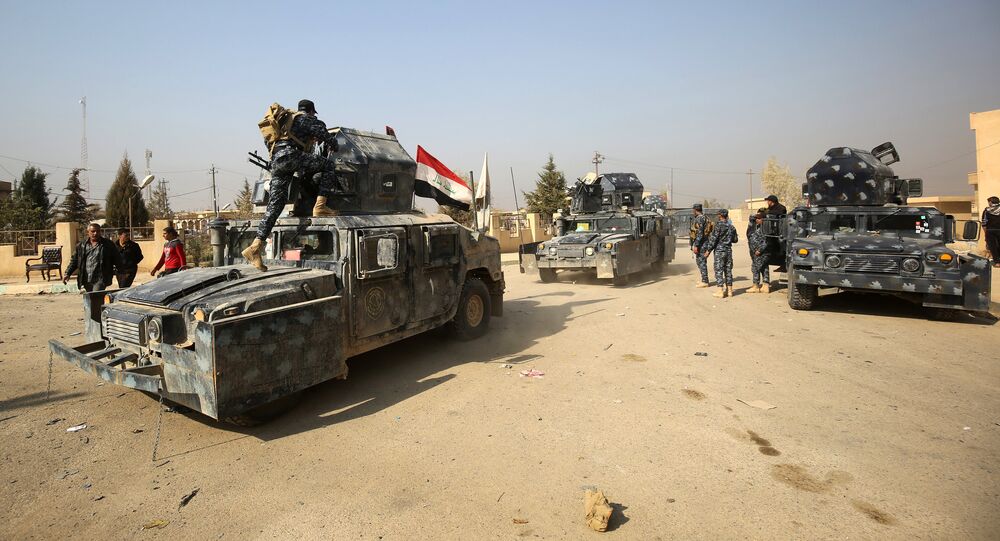 Daesh has "sustained heavy losses" as Iraqi security forces and Kurdish fighters continue a large-scale operation to liberate Mosul, the second largest city in Iraq, Said Mamuzini, a representative of the Kurdistan Democratic Party in Mosul, told Sputnik, describing the offensive as "successful."

"Fighting in eastern Mosul has intensified in recent days. The Iraqi Armed Forces have succeeded in pushing the militants out of several key areas. Ziyad Ğurufa, Daesh's 'information minister' responsible for Iraq, was killed in an airstrike carried out by the Iraqi military. He was a member of the inner circle of Daesh's leader Abu Bakr al-Baghdadi," he said.

Up to 6,000 Daesh fighters are believed to have been present in the city when the operation to free Mosul was launched on October 16. On Monday, Major General Abdul Ghani al-Asadi of Iraqi special forces said that the troops have eliminated nearly 1,000 militants in the city.

Mamuzini noted that Iraqi security forces have to be extremely careful when it comes to urban fighting in order to avoid mass civilian casualties. They are also said to be making an effort to evacuate locals to safe areas.

© AFP 2020 / Odd ANDERSEN
Soldiers from the Iraqi Special Forces 2nd division walk behind their vehicles for cover as they engage Islamic State (IS) fighters while pushing into the Aden neighbourhood in Mosul on November 16, 2016

"The majority of Mosul residents are afraid to flee the city since Daesh fighters open fire at anyone trying to escape. People are forced to remain at home without food or water. There is no electricity in the city. Living conditions are deplorable," he detailed.

Approximately 70,000 civilians are estimated to have fled from Mosul since Baghdad launched the operation to liberate the capital of the Nineveh province. Approximately one million civilians are believed to remain inside the city, the largest in northern Iraq. Baghdad has asked them to stay at home since humanitarian organizations are struggling to accommodate all those displaced by the fighting in and around Mosul.