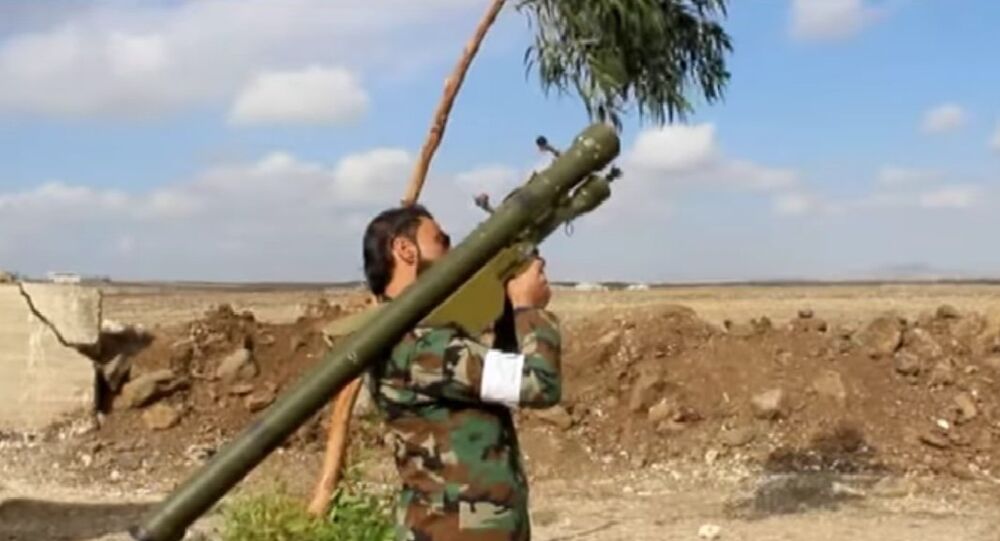 Members of the Syrian terrorist group Ansar al-Islam Front have been seen in a recent video flaunting a store of shoulder-launched anti-aircraft missiles, the first known incident of jihadist forces possessing such weapons.

The jihadists claim they have a "good number" of SA-7 Strela-2 missiles, which the Free Syrian Army (FSA) and Ansar both plan to use against government aircraft in Quneitra and Daraa. The weapons are not shown being fired in the video, but one fighter remarked, "We, in Ansar al-Islam Front, have distributed several points of air defence to counter any attempt by the Syrian warplanes or helicopters which bombs points in Quneitra province. We have good number of these missiles," according to Middle East Eye.

Another fighter identified as "Abu Bilal" said, "We, in Ansar al-Islam Front and factions of the FSA, are distributing equipment and soldiers toward Tal al-Hara, Mashara, Sandaniya and Jabata. And in the coming days you will hear good news from Quneitra and its surroundings,” adding, "There are a lot of preparations for ambushes and units deployed on the front lines. There are units of air defence, infantry elements and other several sets of our factions and the factions of the FSA in Quneitra and its surroundings."

Ansar al-Islam was designated as a terrorist organization by the United Nations and many individual countries, including the US. The group is known for having close ties with the al-Qaeda and Daesh (so-called Islamic State) terrorist groups in Iraq and Syria. Nevertheless, this is not the first time in which members of Ansar al-Islam have received advanced and sophisticated weaponry. In the past, Ansar has also reportedly been among dozens of other “vetted” rebel groups that have received the US-produced BGM-71 anti-tank missile, which is delivered through Saudi Arabia.

The Hasan Mustafa blog explains: "Groups apply for missiles for specific operations, and small batches are supplied by the MOC (Turkey  and Jordan-based Military Operations Command) as needed. No more than a handful are given to a group at any time. In order to prove the rebel groups are not selling them or giving them away, each launch must be recorded and spent casings returned to the MOC. It is due to these requirements that there is such a wealth of knowledge regarding which groups have been supplied with and fielded these weapons."

The US had a long-standing policy banning Syrian rebels from receiving portable anti-aircraft missiles, out of fear that terrorist groups like al-Nursa or Daesh would use them against civilian aircraft, the US, or its allies. However, in September, Reuters reported that anonymous Washington government officials confirmed to the agency that Bashar Assad government’s successful operation in Aleppo "heightened" the possibility that the Obama administration would lift the ban on anti-aircraft missiles for opposition groups.

A stockpile of Soviet-made SA-7 Strela-2 missiles was reported missing from military facilities in Libya, after the ousting of Muammar Gaddafi. The missiles were known to fetch tens of thousands of dollars on the black market. There were reports of a covert CIA operation in Libya to locate and reclaim the missing missiles, to prevent them from getting into the hands of terrorist groups. It is not clear whether the missiles obtained by Ansar al-Islam come from that cache, or even if they are combat-ready.