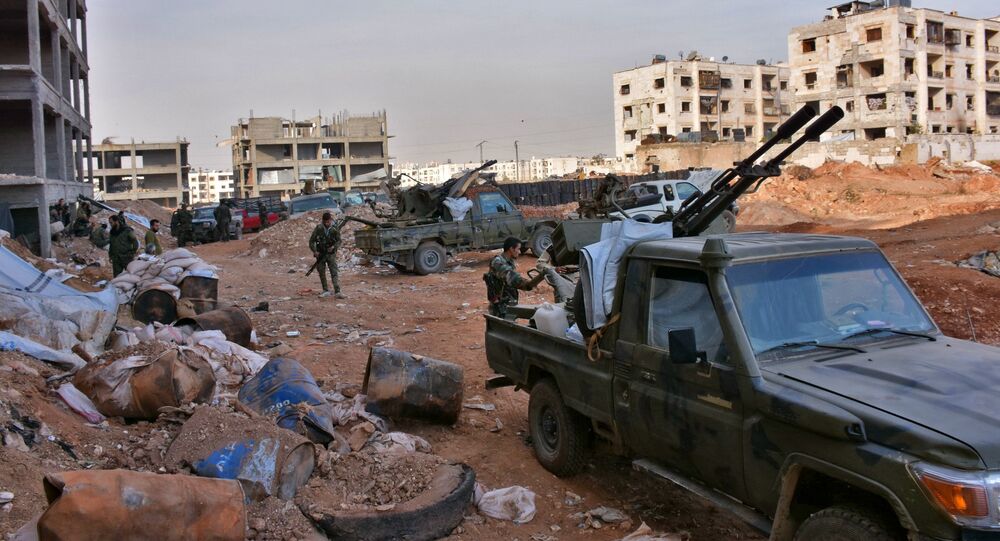 At a time when the situation in Aleppo is again in the spotlight of global media, militants continue to shell the western part of the city, killing civilians. Pierre le Corf, founder of an NGO working in Aleppo, told Sputnik France about the situation in the besieged city.

© Sputnik / Mikhail Voskresenskiy
Syrian Army Has All Info on Locations of Militants, Their Infrastructure in Aleppo
Many Western media outlets, including the AFP news agency, have expressed unanimous concerns over the resumption of bombings in eastern Aleppo last week.

"We are running out of time, we are running against time," de Mistura said after meeting Syrian Foreign Minister Walid Muallem.

"By Christmas… due to military intensification, you will have the virtual collapse of what is left in eastern Aleppo; you may have 200,000 people moving towards Turkey – that would be a humanitarian catastrophe," he warned.

At the same time, the very same media is keeping silent on the civilian victims of jihadists’ bombings in western Aleppo. On Monday, experts of the Russian Defense Ministry confirmed that chlorine and white phosphorus were used by militants in a southwestern Aleppo suburb.

© AFP 2021 / KARAM AL-MASRI
Samples Confirm Militants Used Chemicals in Southwest Aleppo
Moreover, at least seven children were killed in a school in Aleppo as a result of a shelling by jihadists.

Sputnik France spoke to Pierre le Corf, founder of the NGO called "We are superheroes," which has been working in the west of Aleppo for nine months.

"What many people still cannot understand is the fact that the Syrian Army is shelling the positions of terrorists. Terrorists are among civilians in the city. They hold their position in crowded places, in schools and hospitals. They are using civilians as human shields," le Corf said.

"This is always the same old story. When the army heads to the east, terrorists respond by shelling the west of Aleppo. This looks like a tit-for-tat situation. And this happens over and over again," the activist said.

"On the one hand, the militants say they want to liberate the Syrian people from the tyranny of Bashar Assad. On the other hand, militant fighters say they are here [in Aleppo] to kill the infidel fighting for Assad. So, they can kill anyone they label as infidel. They say they are here to bring freedom. But in fact, they twist the Sharia principles to justify killings, rapes and enslavement," le Corf said.

He added that people in eastern Aleppo live like in a trap.

"I’ve met families and children who escaped from the east of Aleppo. They were very lucky because there are explosives everywhere and militants shoot at those trying to escape. People are trapped there," he said.

Le Corf also noted that Western media traditionally ignores violence and civilian killings in the Syrian crisis, including in Aleppo.