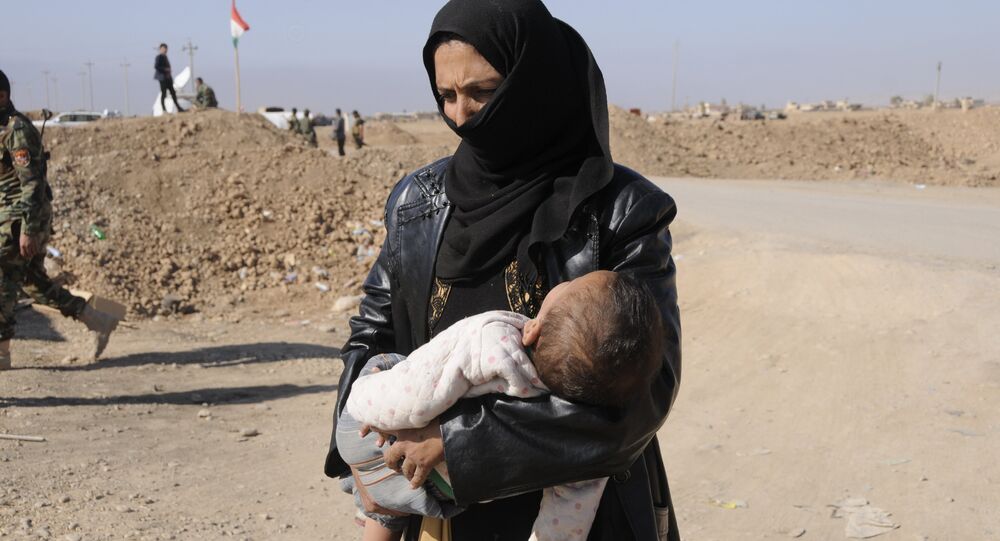 In an interview a Sputnik Turkiye correspondent, women who escaped from Mosul during an operation by the Iraqi Army and Kurdish forces spoke about what they went through in the Daesh-controlled city.

© Sputnik / HİKMET DURGUN
Sputnik Correspondent Visits Liberated District in Mosul After Fierce Clashes (PHOTO)
Now, these women have joined many other refugees at a camp in Erbil, Iraqi Kurdistan.

The operation to liberate Mosul, which involves the Iraqi military and Kurdish forces and is backed by aircraft from the US-led coalition, started on October 17.

Earlier, the Iraqi Army announced they had cleared more than two thousand Daesh militants in Mosul since the beginning of the operation.

Aliyye Bozan asked not to have pictures taken of her and her children.

"Our relatives are still in Mosul and we don’t want to endanger them. We’re still afraid of Daesh because it’s impossible to forget what we’ve lived through in Mosul. They [Daesh] killed civilians and jihadists guilty of misconduct by stoning," she told Sputnik Turkiye.

Bozan said that a woman she knew was stoned to death by Daesh militants because she dated a man. This happened right in the street where everybody could see. The terrorists also killed a widow who had an affair with a married man.

"All those atrocities are still before my eyes. I can’t forget this. The poor woman was begging for mercy but terrorists shouting 'Allah Akbar' didn’t want to stop the bloody massacre. I can’t find the words to describe how I felt for that woman. And there were many such cases," Bozan recalled.

She added that the jihadists killed every woman they suspected of adultery. Those women, who talked with men in the streets or were improperly dressed, as the militants believed, faced the humiliating punishment of being publicly whipped.

According to her, right after the terrorists seized the city life in Mosul, especially for women, turned into torture. The terrorists imposed very strict rules regulating everything in a woman’s life.

For example, a woman with strands of hair visible from underneath her hijab was punishable with 50 lashes.

"Once, the daughter of our neighbors opened the door to her father. At the moment, her head was not fully covered. A passing female Daesh patrol noticed her and took the poor girl to a police station and punished her," Heso said.

Heso noted that Daesh militants were especially violent towards the Shiite population.

"They hate us because we’re Shiites. Of course, they are mean to everyone, except for Sunni Arabs. They treated Christians, Assyrians and Kurds like they were not humans," she said.

"One day, they broke into our house and saw a portrait of Imam Ali [the first Imam of the 12 Imams worshipped by Shiites]. They took my husband and my sons and tortured them for several days. My younger brother was thrown to jail because our elder brother served with the Iraqi Army. They accused him of espionage," Heso said.

Sara Abdullah said the life in Mosul under Daesh was "unbearable."

"I escaped from Mosul yesterday. Previously, we already madep escape plans but we couldn’t do that. Our life in Mosul was unbearable. We lived like prisoners in Mosul. We tried not to leave our homes unless it was absolutely necessary because we didn’t’ want to be seen by Daesh militants," she said.

© Sputnik / HİKMET DURGUN
Merciless: Disabled Men, Children Recall Horrors of Life Under Daesh's Control Near Mosul
"My daughters stopped using makeup. Listening to music at home was prohibited. TV was banned seven month ago. We were afraid to smoke even at home. For women, normal life in Mosul ended when Daesh came," Abdullah said.

Trying not to cry, 29-year-old Hori Celil said he was forced to marry a Daesh militant in Mosul.

"Against my will, I was forced to marry a Daesh militant. He already had two wives. One of his wives was Yazidi. She was taken as a slave by the terrorists," she said.

Daesh militants believe that a man can have as many wives as he wants, Celil said. Almost all terrorists in Mosul were married. Many jihadists died in clashes, so their wives often became widows. Usually, two months later they were forced to marry another militant.

"I know many women who were married to jihadists five or six times," she said.

Mosul Offensive: US Drops One Bomb Every Eight Minutes