Huseyin Ibrahim's children, who are now in a refugee camp, told Sputnik of their harrowing ordeal when a US coalition airstrike hit their home in Mosul. 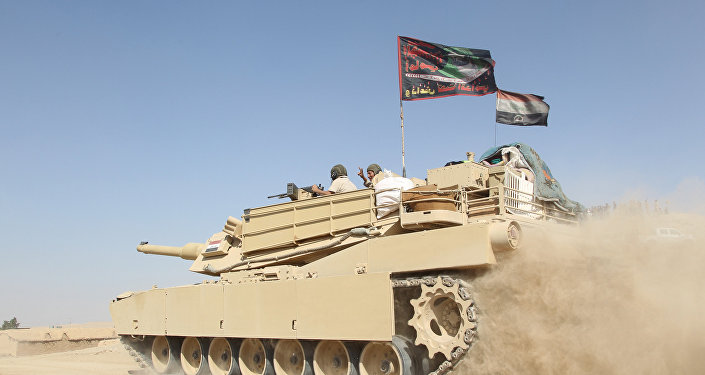 On Thursday it was reported that Iraqi forces are continuing their advance against Daesh, and had entered neighborhoods in the east of Mosul.

However, amid the advances, there have also been reports of civilian casualties as a result of US-led coalition airstrikes on residential areas of the city.

On Thursday Lt. Gen. Sergei Rudskoy, chief of the Russian General Staff Main Operational Directorate gave details of bombing of residential districts by the coalition on October 24 and 31.

A similar incident was also reported in the village of Faziliye close to Mosul, where 13 civilians were killed by a US coalition airstrike.

Most recently, on Thursday US air force jets reportedly bombed the village of Ebu Carbule, east of Mosul. As a result of the bombing, 25-year-old Mahir İbrahim lost his left leg, and his five-year-old sister Esma and six-year-old brother Yusuf fell into a state of shock.

After the attack, the children's father Huseyin İbrahim took his two younger children to a checkpoint controlled by Peshmerga forces ten kilometers from Mosul, on the road to Erbil. He quickly took his wounded elder son to hospital in Erbil.

Peshmerga troops put the children in the back of a pick-up truck, while they waited for their father to return.

© Sputnik / HİKMET DURGUN
'We're Tired of War': Mosul Residents Get Long-Awaited Chance to Flee Terrorists
Struggling to speak, Yusuf told a Sputnik correspondent that the family home was hit by an airstrike, as a result of which his older brother lost a leg. He said he wants to see his mother, father and brother as soon as possible.

"Father, come and get us, we are very scared!" both children cried.

After two hours, Huseyin Ibrahim returned for his two youngest children, and took them to the Hazir refugee camp in Erbil, for refugees from Mosul.

On Thursday the UN Refugee Agency reported that almost 3,000 refugees had arrived in camps set up near Mosul over the previous 24 hours, in addition to more than 20,000 civilians displaced since the offensive was launched on October 17.

Before it was overrun by Daesh forces in 2014, Mosul was the second-largest city in Iraq. The UN estimates that up to 1.5 million people are still living there, and as many as one million may be forced to flee their homes during the battle for control of the city.