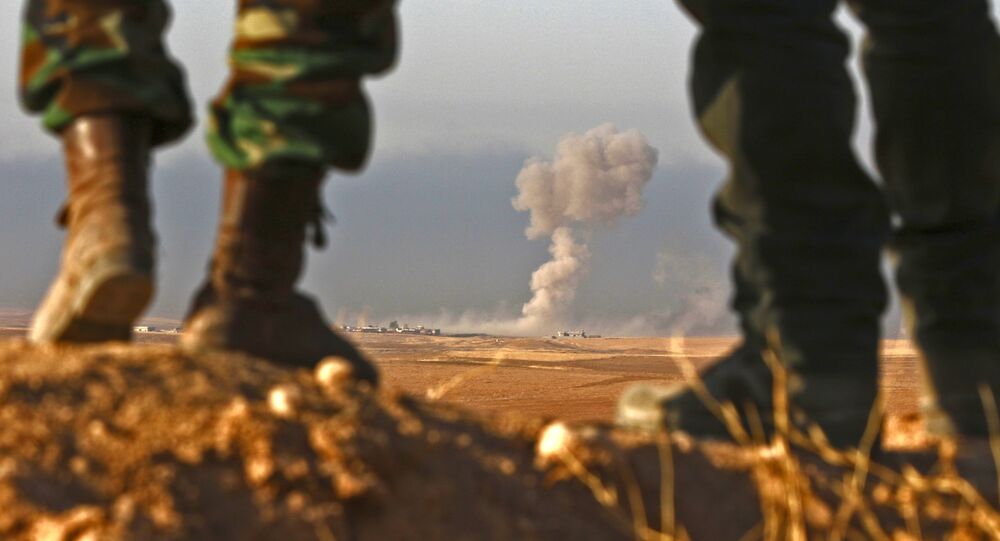 As the US-led coalition rushes to free the Iraqi city of Mosul from Daesh, the jihadists are said to be preparing to use civilian residents as human shields against advancing forces.

© Sputnik / Hikmet Durgun
'Thousands of Peshmerga Fighters Involved in Battling Daesh' in Iraq’s Mosul
At least 550 Iraqi families from villages around Mosul have been taken to the city and forced to stay in Daesh-controlled areas, according to UN human rights office spokeswoman Ravina Shamdasani.

Judging by various reports from around Mosul, Daesh is preparing for a desperate defense, and willing to resort to any means necessary to defend itself in Iraq, which could include chemical weapons, suicide bombings and other kinds of explosives, and, worst of all, using the city's civilian population as human shields.

Without thorough planning and a careful approach, the attack on the city will lead to vast civilian casualties, as over 700,000 people are still believed to be in the city, trapped between roughly 3,000-8,000 Daesh fighters and 25,000 coalition troops. Despite Iraqi Prime Minister al-Abadi's statements about establishing safe routes, Daesh is unlikely to let people leave freely.

"[Daesh] has been rigging all of Mosul with explosives, and forcing people to leave their neighborhoods on the outskirts to go deeper into the city," one city resident told the Daily Mail during a clandestine phone call.

"This has been going on for several weeks where we've seen civilians being forcibly detained and their movements being prevented where they can't get out of Mosul. They are being held there against their will," Pentagon spokesman Captain Jeff Davis told reporters, describing the operation to liberate Mosul as "an ugly fight."

© Sputnik / Hikmet Durgun
Political Reforms to Help Heal Mosul After City Liberated From Daesh
The jihadists have built significant defenses, including trenches to be filled with oil — both to stop the advancing ground troops and create difficulty for accurate airstrikes — and makeshift concrete bastions erected in and around the city. The violent extremists have also reportedly forced women and children to remain on the tops of buildings, in an effort to discourage airstrikes. Other reports indicate that the militants are prepared to use homemade mustard gas, or other volatile chemicals, that are unlikely to do much harm to the advancing forces who are reportedly equipped with military-grade gas masks, but may have a disastrous effect on the city's unprotected population.

The operation "has the potential to be largest man-made disaster for many, many years," warned Bruno Geddo, the UN High Commissioner For Refugees' top official for Iraq.

© REUTERS / Goran Tomasevic
'A Big Electoral Show': Mosul Liberation Will Not Be the 'Defeat of Daesh'
Officially, the US-led offensive, involving Iraqi and Kurdish forces, aims to trap Daesh in Mosul and destroy it there. However, the Syrian Army command has already accused the US of planning to allow Daesh militants to flee across the border into neighboring Syria. This idea has been supported by French Foreign Minister Jean-Marc Ayrault, who said the jihadists will likely attempt to flee to Raqqa, Syria.

Many of the fighters currently stationed in Mosul are EU citizens and may choose to return to the European Union, where they would pose a grave security threat, EU officials warn, according to a BBC report.

The current leader of Daesh, Abu Bakr al-Baghdadi, is believed to be in Mosul, along with his senior explosive expert, Fawzi Ali Nouimeh, according to what Hoshiyar Zebari, a senior Kurdish official, described as "solid" intelligence reports. Should the leaders chose to stay in the city, the jihadists' desperate defense would turn the fight for Mosul into something much worse than what has been seen recently in Aleppo.