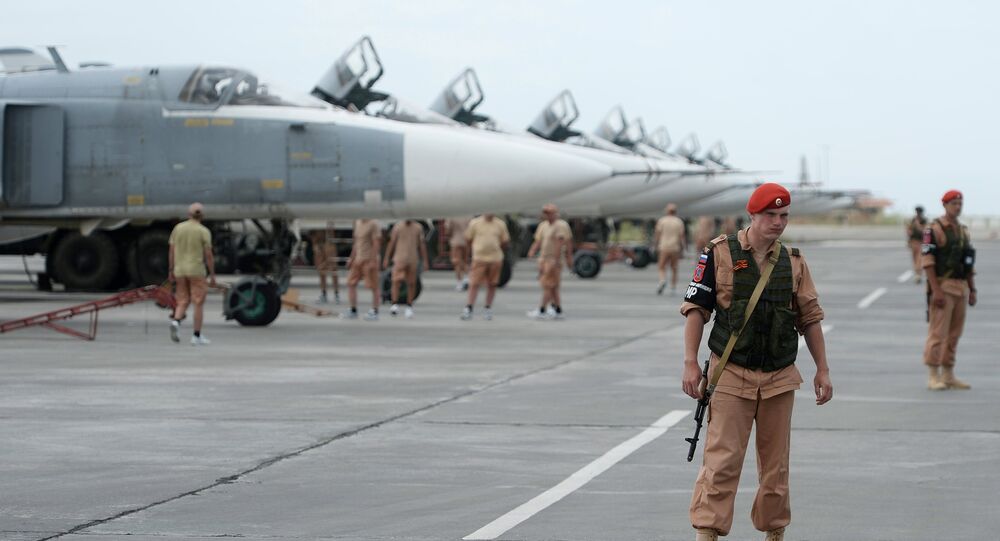 The Syrian army is learning from the experience of the Russian Aerospace Forces, assisting Damascus in its fight against terror groups, Syrian army general Osama Hudur told Sputnik.

© Photo : Russian Defence Ministry
With Limited Means and One Year Russia Achieved More in Syria Than US and Allies
A year ago Russia began its aerial anti-terror operation in Syria, operating in cooperation with the Syrian army on the ground at the invitation of the Syrian government.

"This military operation has played a big role in stopping the spread of terrorists and reducing their military capability. The Russian Aerospace Forces carried out precise airstrikes in coordination with the Syrian Arab Air Forces and destroyed a large number of terrorists and military infrastructure," Hudur said.

Russian airstrikes have destroyed more than 50 percent of the infrastructure used by terrorist organizations, and closed off the routes they use to transport military technology and stolen oil intended for sale on the black market, Hudur said.

Additionally, the presence of Russian forces has strengthened the military and intelligence cooperation between the two countries.

© Sputnik / Dmitriy Vinogradov
Russian Aerospace Force’s Operation in Syria in Details
"All this gave the Syrian Army many successes in its anti-terrorist operations in many regions of Syria.  to The Russian army has a great military history, Russian officers have a lot of experience which (we can) learn from," the general explained.

"The Syrian army also has experience of fighting a defensive war. In this way, there is an exchange of experience during reconnaissance and military flights, in defense operations and in battles (in different circumstances) – at night, during the day, in towns, mountains, the desert and the forest," Hudur said.

Over the past year the Russian Aerospace Forces have carried out more than 15,000 sorties, RIA Novosti reported on Friday.

Russian airstrikes have killed 28,000 Islamist terrorists belonging to Daesh and al-Nusra Front, 2,000 of whom came from Russia. They also destroyed more than 200 oil processing facilities under the control of Islamist militants, as well as more than 2,000 delivery vehicles used to illegally smuggle oil across the border to Turkey.