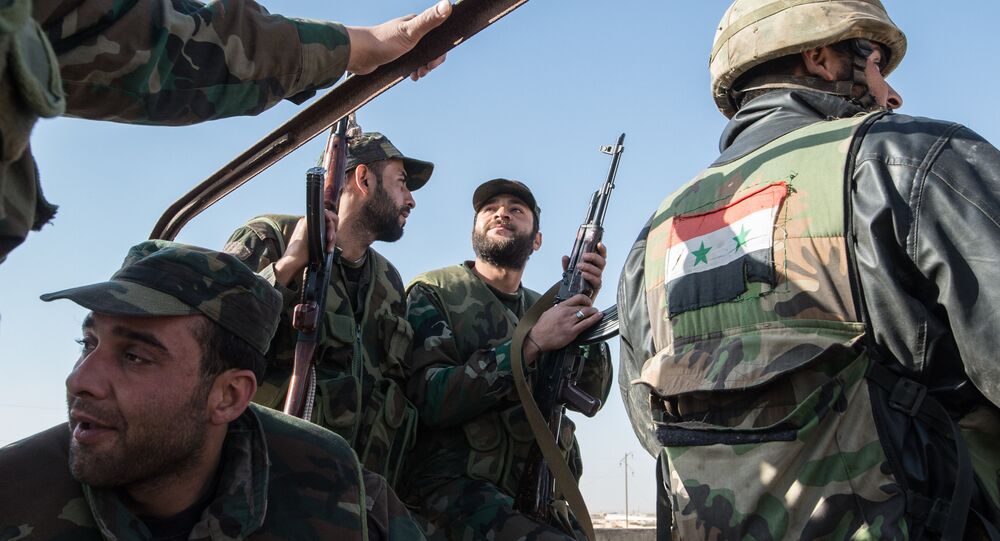 Without Russian military support, Syria would not be saved, according to different experts.

MOSCOW/WASHINGTON (Sputnik) — A year into the Russian offensive, Syria has moved away from the brink of collapse where it had teetered at the peak of jihadist offensive in 2014, experts told Sputnik on Friday.

"The Russian intervention was decisive to save Syria. Without Russian military support, Syria would not be saved. It was a matter of time for it to collapse. Why? Because the United States, with its allies, was pouring volunteers, arms, weapons." Lajos Szaszdi, a defense analyst and professor at the Inter-American University of Puerto Rico, said.

© AP Photo / Hassan Ammar
US Reluctance to Blame For Collapse of Russia-US Peace Deal on Syria – Damascus
Russian President Vladimir Putin announced the start of the military operations on September 30, 2015, prompting criticism from Washington and its allies who had already been fighting Islamic State (ISIL or Daesh) in Syria and Iraq for a year.

Russia mounted its offensive against jihadists at a crucial time when Syria was being carved up by terrorist groups and US-backed opposition fighters, Szaszdi said.

"The Syrian government with the Russian air support has been able to turn the tide of the war… But the job has not been done, because the United States and its allies keep supporting terrorists. I think they realized they cannot bring down the government of Bashar Assad, but they want to keep the country fragmented," he told Sputnik.

© REUTERS / Maxim Shemetov
Russia Does Not Use Banned Weapons in Syria - Lavrov
Noomane Raboudi, an assistant professor at the University of Ottawa, believes that Russia’s decisive strategy has already thwarted attempts to divide Syria, in addition to keeping the Syrian government in power and degrading the Daesh.

"All that [those] three goals were achieved," he said. "The American strategy in Syria is very unclear, confused and hesitating because the American has not clear allies in Syria. They don’t trust the Syrian opposition. At the opposite…the Russian intervention was decisive, clear and with the necessary force of fire."

Ministry of defence of the Russian Federation
Russian Aerial Campaign Spurred US Anti-Terror Efforts in Syria, Iraq
By sticking up for the Syrian government, Russia has strengthened its influence in the country and in the wider region, Renad Mansour, a former adviser to Iraqi Kurdistan’s Regional Government and currently fellow with Carnegie Middle East Center, said.

"Russia has gained considerable leverage in Syria and the Middle East more generally, as Putin has outplayed Obama," he told Sputnik.

"It also has shown to the United States and its coalition of terrorist sponsoring countries that Russia is a major player in international community," Lajos Szaszdi agreed.

Although the immediate threat to the Syrian statehood has been averted, the outlooks for its future remain uncertain after the recent nationwide ceasefire effectively collapsed. The White House warned Moscow earlier this week that it was close to ending cooperation with Russia on Syria amid resurgence in violence.

"Only if the big powers involved come to an agreement the situation can be stabilized," Heinz Gaertner, academic director at the Austrian Institute for International Affairs, told Sputnik. "You cannot leave the negotiations to the militias, and the Syrian government for that matter."

Renad Mansour said that compromise between external actors was a likely solution. This would probably mean that President Bashar Assad would have to stay, an outcome that is certain to anger the opposition.

"That may not be perceived as great by some Syrians. You will have close to 1 million dead and millions more displaced, only to try to go back to how it was at the start in 2011," he said.

© REUTERS / Abdelrahmin Ismail
Fight Against International Terrorism Russia's Only Goal in Syria - Russian Foreign Ministry
Szaszdi argued that the United States would want to "prevail no matter what."

"I think the US government felt it was so close that Syria was going to fail, that they cannot just give it away… The United States doesn’t want really peace. They want the Syrian government to fail, to collapse, be fragmented for the benefit of countries such as Israel and Saudi Arabia," he said.

Ivan Eland, a senior fellow at the Independent Institute think-tank in California, told Sputnik that partitioning was the only long-term solution to the Syrian crisis as it would give all warring parties and outside powers an incentive to make peace.

"All outside parties should realize that Syria, like Iraq, is history and cannot be put back together again. Russia and the United States should give all parties in the conflict an incentive to settle it by partitioning both countries," he claimed.