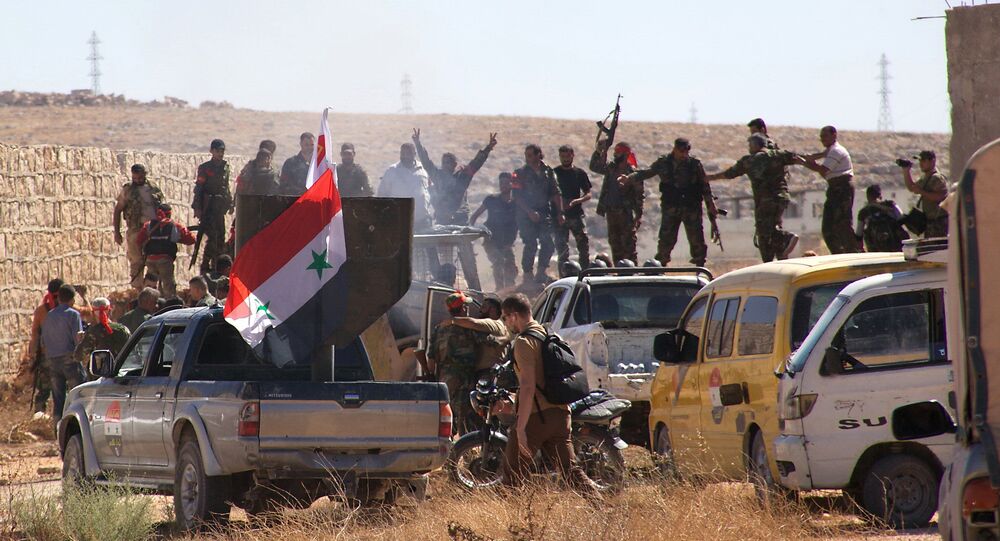 Recent diplomatic clashes and Western allegations against Russia over Syria stem from the situation on the ground. The Syrian Army is close to defeating terrorists in Aleppo. The West understands that this victory would change the situation in the region.

© AFP 2020 / GEORGE OURFALIAN
De Mistura: Dozens of Women, Children Killed Since Start of Aleppo Offensive
There is a common knowledge that the battle for Aleppo is about the size of the city and its geographical location. Before the war, Aleppo was a city with a population of over two million and the economic center of Syria.

Now the city lies in ruins. Its population has decreased to 300,000-350,000. Its economy and infrastructure have been destroyed.

The Syrian government wants to restore control over Aleppo not because of its economic or human resources, but this victory would turn the tide of the Syrian war and change the situation in the entire region, an article in the Russian online newspaper Vzglyad read.

When the war in Syria broke out, opposition forces planned to take control over Aleppo and Idlib to establish a belt for further advances on Damascus. In addition, control over such a large city allowed independent "governments" to be established. They received support from foreign backers and continued the fight against President Bashar Assad.

© REUTERS / Andrew Kelly
Syrian Government Will Fully Restore Control Over Aleppo - Syrian UN Envoy
However, the plan to use Aleppo as the centerpiece of an offensive on Damascus failed due to firm resistance from the Syrian Army and local militia groups. Finally, combat actions outside Aleppo resulted in cutting off supply lines for jihadists and so-called moderate rebel forces in the city.

Currently, the largest and the most capable jihadists and moderate forces are concentrated in Aleppo. It is entrapped by the Syrian Army.
If they are defeated this may not end the war but will definitely change the situation for the benefit of Damascus.

"In fact, the defeat of the terrorists in Aleppo is inevitable. The West and its allies suddenly realized this fact. As a result, they intensified political and military efforts to save the entrapped militant group," the article read.

If the Syrian Army restores control over Aleppo, this will open the way to Idlib, which currently is the center and the headquarters of Syrian militants.

© AP Photo / Manu Brabo, File
Battle for Aleppo: US-Backed Rebels Shut Off Water for 1.5 Million Civilians
Moreover, the destruction of the jihadist enclave in eastern Aleppo will allow for restoring connection with the Kurdish region. Thus, Syrian Kurds would have to turn away from Washington to Damascus, dealing a blow to US positions in the region, according to the article.

"The liberation of Aleppo will ruin the Western strategy aimed to topple Assad. This is what provoked the diplomatic hysteria and media buzz in the West in the recent days. The battle of Aleppo is the key battle not only in the Syrian war but also in the standoff in the Middle East, including major global players," the article read.