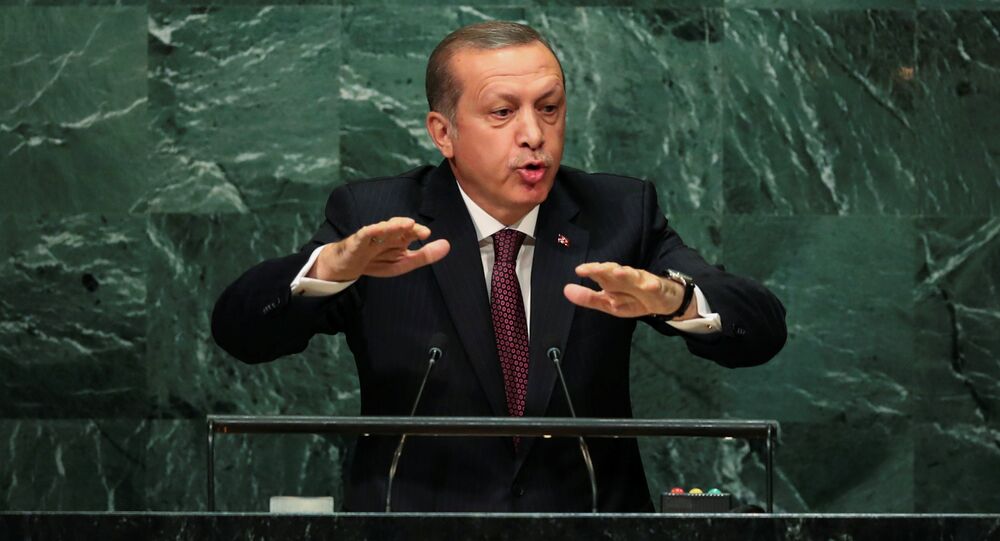 Speaking at the UN General Assembly, Turkish President Erdogan has defended his decision to send ground troops into Syria claiming that his incursion had helped establish "peace, balance and stability in a region taken over by hopelessness"; however political analyst Mehmet Yuva has warned Ankara against crossing "Russia's red line" in the country.

© AFP 2020 / LOUAI BESHARA
US Proxies in Syria Violated Ceasefire 'to Prolong War Until Clinton Presidency'
Turkish President Recep Tayyip Erdogan has used the UN General Assembly platform to defend his invasion into Syria claiming it has helped restore "peace, balance and stability in a region taken over by hopelessness".

Turkish officials have vowed to continue military operations in the border region with Syria "until all threats to its national security are removed."

"It is only too clear that Turkey is striving to play a more substantial role in defining Syria's political future. Or, at least to ensure that the groups it supports take part in this process," Mehmet Yuva told Sputnik.

The political analyst noted that such a decision might seem quite natural for the neighboring country.

However, he added,  if Ankara, on the one hand, wants to create a safe zone along its common border with Syria and prevent the unification of the Kurdish cantons, and, on the other, eliminate Daesh in the region, it should act more transparent and establish contact with other players in the region, and, first of all, with the Syrian government.

© REUTERS / Umit Bektas
Ankara Has No Plans to Use Own Infantry in Euphrates Shield Operation
Meanwhile, until now Turkey has failed to demonstrate its eagerness to set up contact with the central Syrian leadership for further settlement of the crisis in the country.

"This causes serious concerns amongst Russia and Iran who expected a more active approach from Turkey in the setting up of a direct dialogue with Damascus," Yuva told Sputnik.

"Taking into account all the above, Ankara should not forget that its military presence in Syria is possible only thanks to Moscow in the first place, which did not impede its Euphrates Shield operation," he said.

The expert noted that the political and military presence of Turkish armed forces on the territory from the western Euphrates towards the city of Azaz, including the city of al-Bab, does not trigger Moscow's concern.

However Russia, he added, firmly insists that it is the Syrian government army which should control the line from Aleppo and Idlib to the north of Lattakia.

"This is the red line for Russia. In case the Turkish troops cross this line, it could drastically alter the situation in the region and trigger the process of turning the "proxy hybrid wars" into direct military actions between foreign forces in Syria – and this means a new world war," warned the political analyst.

© REUTERS / Umit Bektas
Erdogan Denies Territorial Claims in Syria
Commenting on the Turkish Euphrates Shield military operation, the expert noted that Ankara claimed that its main aim is to ensure security of its border territories and clear it from Daesh and other terrorist groups.

However Mehmet Yuva pointed out that it is being carried out in cooperation with the opposition Free Syrian Army (FSA) fighters and with the support of the Turkish military.

"Everyone knows only too well that is the FSA is all about and who it consists of," the expert said.

Besides, he added, it has become known that the Ahrar al-Sham group, a coalition of multiple Islamist and Salafist units also intends to take part in the operation.

All the above has made the expert wonder what Turkey is really after from the military operation in Aleppo. It could be the case that it is planning a new operation with those groups which were previously defeated in Aleppo, or alternatively Turkey may want to prevent the closure of the frontline in Aleppo and to continue further support of the opposition groups in the region.

The real reasons are yet to be revealed, Yuva concluded.