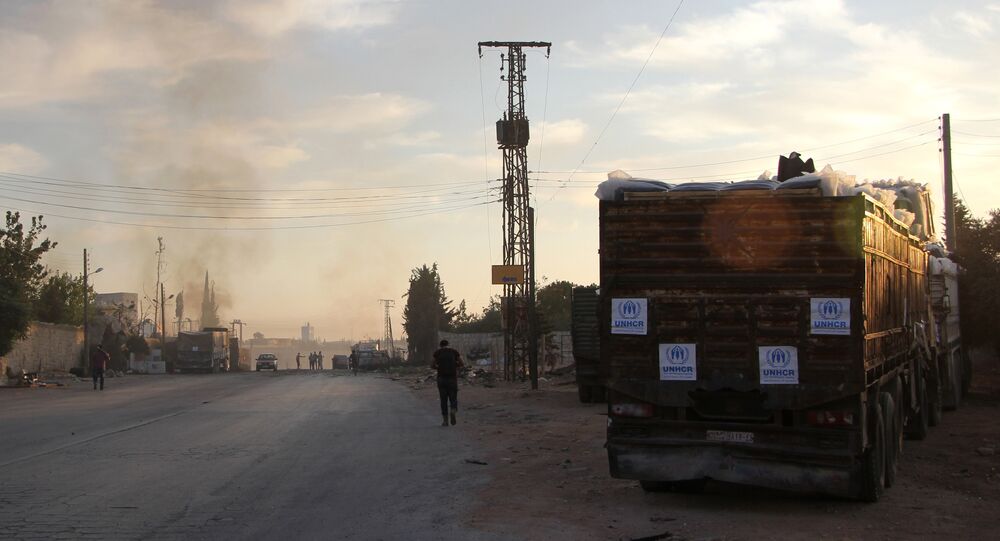 The United Nations suspended the movements of its aid convoys in the crisis-torn Syria, after one of them had been attacked on its way to the city of Aleppo, but ready to renew these activities when the situation becomes safer, a spokesman for the UN Office for the Coordination of Humanitarian Affairs' (OCHA) said Tuesday.

GENEVA (Sputnik) — On Monday, the UN officials said that an aid convoy was hit near the Syrian city of Aleppo and there were casualties. Earlier on Tuesday, the International Federation of Red Cross and Red Crescent Societies (IFRC) said that at least one humanitarian worker and around 20 civilians were killed in the attack.

"We have been forced… to suspend all the convoy movements for the time. That does not mean that it is not gonna happen later. But we need to have a proper security assessment of what happened yesterday so that we can take that into account for further planning. But of course, as soon as we can safely proceed, we have convoys ready," Jens Laerke told RIA Novosti.

© AFP 2021 / Omar haj kadour
Russian, Syrian Jets Did Not Conduct Strikes on UN Aid Convoy in Aleppo - Russian MoD
He added that the United Nations had a convoy on the Syrian-Turkish border, which was ready to deliver aid to the crisis-torn areas.

Millions of Syrian people remain in urgent need of humanitarian aid, which cannot be delivered due to continuation of fighting in the country. According to the United Nations, around two million people need humanitarian assistance in Aleppo, which has been mired in intense fighting during the past months.

EU Concerned About Attack on Humanitarian Convoy in Aleppo – Spokeswoman