In Syria there is a continuous supply of potatoes for the Syrian Army soldiers throughout the country in any season of the year. Sputnik takes a look at why potatoes are the most popular meal throughout the army. 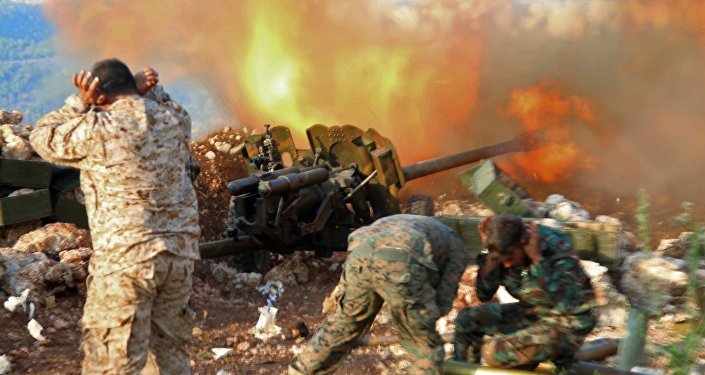 © Sputnik / Michael Alaeddin
EXCLUSIVE VIDEO: Syrian Army Unleashes Heavy Artillery and Airstrikes on Terrorists in Latakia
Statistics show that one Syrian soldier consumes about 250-300 grams of potatoes per day. Their favorite way of eating potatoes, boiled.  In the Syrian Army it is not common to eat fried and fatty foods.

A nutritionist at the Al Mouwasat Hospital in Damascus, Akhmed Khamsho, told Sputnik, that potatoes have a unique property of making the person feel full with just a small amount of consumption, however because they contain a lot of carbohydrates it makes them the most suitable staple food during tough times such as war.

“Instead of fatty food that hinders digestion, soldiers eat potatoes that are high in carbohydrates. It is quick and easy to cook and can be stored for a long time, unlike other products,” Khamsho further added.

In turn, a field commander in the Syrian Army told Sputnik, that soldiers are fed potatoes to prevent digestive problems and because potatoes are digested quickly, allowing soldiers to get back to their ranks soon after eating.

“Soldiers and officers eat potatoes with lentil soup. Such food does not interfere with the activity of men, does not cause problems with digestion and they are always ready for physical activity right after a meal,” the source added.

Syria has been mired in civil war since 2011, with government forces loyal to President Bashar Assad fighting numerous opposition factions and extremist groups, such as Daesh, which is outlawed in many countries, including Russia.

'We Are Safe Now': Life Returns to Aleppo Suburb Liberated by Syrian Army