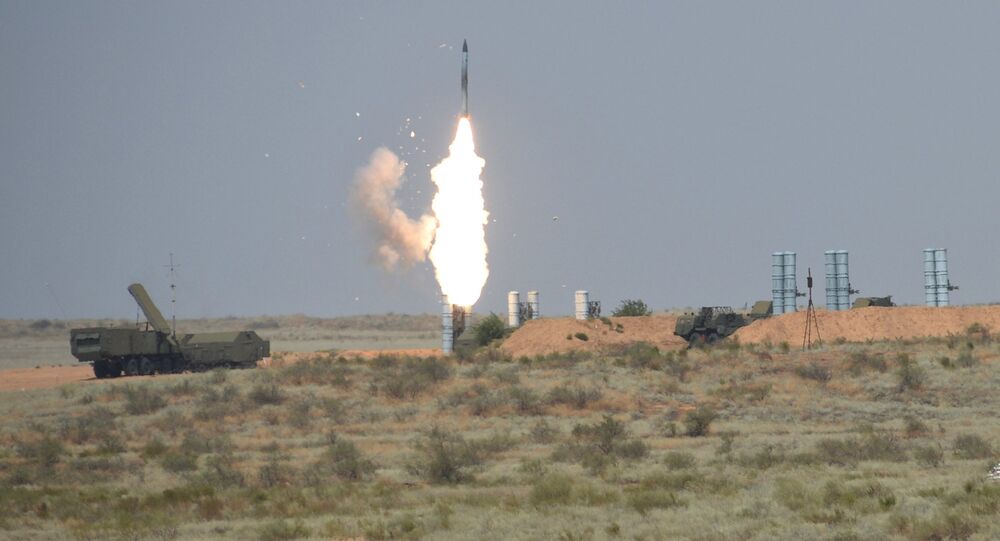 Iran has deployed its Russian-made S-300 surface-to-air missile system around an underground uranium enrichment facility in Fordow, 125 km southwest of Tehran, Iranian state television has reported. Commenting on the deployment, Iranian experts have suggested that this is more evidence about the depth of the Russian-Iranian strategic partnership.

Speaking to state television on Sunday, Farzad Esmaili, the commander of Iran's Air Defense Force, explained that "our main priority is to protect Iran's nuclear facilities under any circumstances." While the commander did not clarify whether the S-300s at Fordow were already operational, Esmaili did say that "today, Iranian skies are among the most secure in the Middle East."

The commander's remarks were accompanied by state television footage showing the recently purchased S-300 missile systems being transported and deployed in the area around Fordow.

Commenting on the deployment, Sajjad Tayeri, an expert in Iranian-Russian relations, suggested that the news serves as another indication that cooperation between Russia and Iran has reached a strategic stage.

Speaking to Sputnik Persian, Tayeri recalled that the supply of the S-300 had long been seen as a problem area in the deepening of Russian-Iranian relations, with Russia promising to supply Tehran with five S-300 systems in 2007, before suspending the contract in 2010, citing a UN Security Council resolution which placed an arms embargo on Tehran.

© Photo : JSC Sukhoi Company
Iran Now Eyeing Sukhoi Jets After Success With Russian S-300s
In April 2015, shortly after Iran and the P5+1 group of international negotiators reached an agreement to remove all sanctions against Tehran in exchange for the country's pledge on the peaceful purposes of its nuclear program, Russian President Vladimir Putin lifted the S-300 delivery ban. The first batch of S-300s was delivered to the country earlier this year.

"Today," Tayeri noted, "we see that after the signing of the [nuclear deal], when various countries' trust in Iran has been restored, the long-standing friendship which has always existed between Russia and Iran has strengthened even more."

The analyst suggested that Moscow and Tehran's cooperation in the anti-terrorist operation in Syria, along with the recent negotiations on the legal status of the Caspian Sea, have only further increased the level of mutual trust and collaboration between the two countries. "The level of cooperation between our countries is growing, and is becoming more effective."

© AP Photo / Office of the Iranian Supreme Leader via AP
Washington Prefers Iran to Be Defenseless – Supreme Leader
Asked to comment on the likely implications of the deployment of S-300 around Fordow, the analyst pointed to Sunday's statement by Iranian Supreme Leader Ayatollah Khamenei, who emphasized that the S-300 is a purely defensive system, not an offensive one.

"Iran," Tayeri added, "has never created any plans for aggression or invasion of other countries; it does not have such plans and never will."

According to the expert, "the Russian S-300 and its Iranian made analogs are intended for the defense of our territory – of key industrial objects."

Noting that Tehran still has many reasons not to trust Washington, including in its fulfilment of its side of Iranian nuclear agreement, the analyst emphasized that "as far as cooperation between Russia and Iran is concerned, it has, on the contrary, been greatly strengthened and is already at the strategic level. It's for this reason that the Russian S-300 systems were deployed around our country' nuclear and strategic military facilities."

© Wikipedia
Birds-eye view of the Fordow Nuclear and Physics Research Center (NPRC)
© Photo : Iran Military Warfareknow facebook
Ready to Compete: Is Iran’s Bavar-373 System an Answer to Russia’s S-300?
Fordow's underground uranium enrichment facility, revealed to the world in 2009, has not engaged in uranium enrichment since January 2016, when the Iranian nuclear deal's provisions came into effect. The facility is built about 90 meters under a mountain. Iranian officials have since said that the decision to build the facility deep underground in a fortified position was made due to repeated threats by Israel to attack such facilities. Tel Aviv carried out a surprise airstrike on an Iraqi nuclear reactor in 1981.

Iran showcased its own new air defense system, the Bavar-373, at a military expo last week. The system's development has prompted speculation that it was designed as Iran's answer to the S-300.