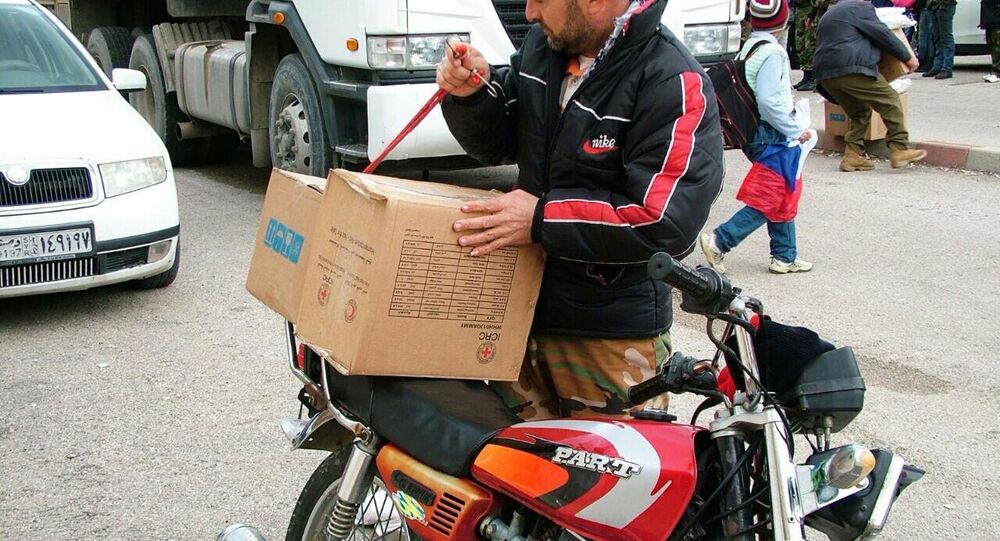 Russia delivered more than 26 metric tons of humanitarian aid to the Syria’s provinces of Latakia and al-Quneitra as well as to the city of Deir ez-Zor besieged by Daesh jihadists, a daily bulletin published on the Russian Defense Ministry’s website on Tuesday said.

MOSCOW (Sputnik) – It also added that the humanitarian situation in the western part of the city of Aleppo is under the control of the Syrian government troops. According to the bulletin, first aid centers and posts with hot meal continue their work in the humanitarian corridors.

“Low-income families of the Ain-al-Beida (Latakia province) and Al-Baas (Al-Quneitra province) inhabited areas have received more than 5 tons of humanitarian cargos with rice, sugar, tea, canned meat and fish. Aircraft of the Abakan Air, Russian aviation company, has dropped 21 tons of UN humanitarian cargos with corns, salt, and sugar on Deir ez-Zor, which had been besieged by ISIS [Daesh] terrorists,” the bulletin said.

On February 27, a US-Russia brokered ceasefire came into force in Syria. Terrorist groups such as Daesh, as well as Jabhat Fatah al Sham (previously known as the al-Nusra Front), both outlawed in Russia and a range of other states, are not part of the deal.

Pentagon Says US Not Fighting Against al-Nusra Front in Syria

Think Tank Rules Out Russia's Use of Incendiary Weapons in Syria

CIA and Pentagon 'Do Not Want Obama to Resolve Syrian Crisis'