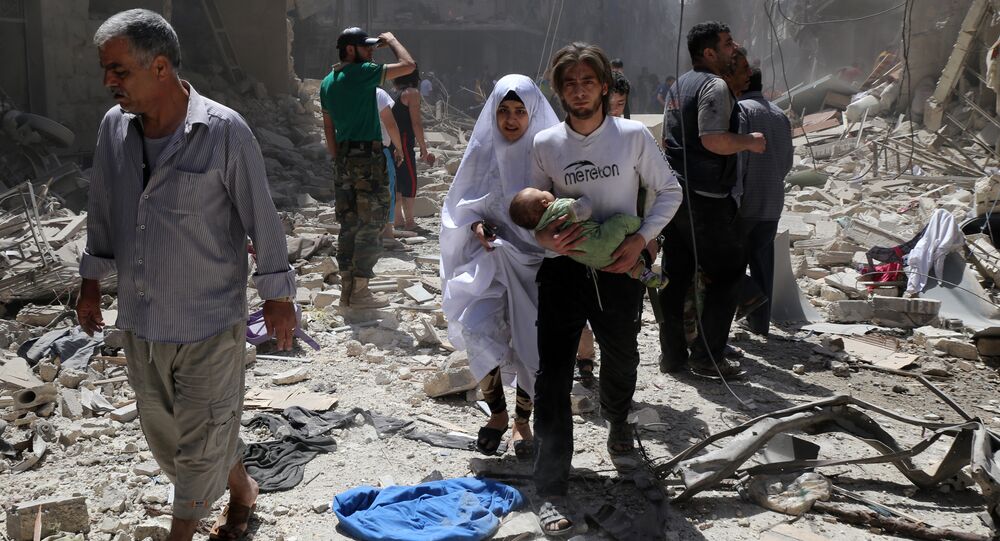 Russian and Syrian military are going to establish four more humanitarian corridors in the besieged city of Aleppo, in addition to three existing corridors that already helped hundreds to reach safety.

© Sputnik / Andrey Stenin
Syrian-Russian 'Humanitarian Offensive' Takes US Policymakers by Surprise
According to Lieutenant-General Sergey Chvarkov, the head Russian reconciliation center in Syria, four more humanitarian corridors will be established in the Syrian city of Aleppo in the near future by joint efforts of Russian and Syrian military forces.

"In addition to the existing corridors, we are organizing four more humanitarian corridors," the general said.

Chvarkov said that the existing three corridors have already helped 169 civilians and 69 militants who chose to lay down arms, to escape the besieged city.

"In the areas of those humanitarian corridors we have equipped stations with hot food and medical assistance. The Syrian authorities have prepared six centers of humanitarian assistance, which can accommodate and satisfy needs of more than 3,000 people," he stressed.

© AFP 2020 / GEORGE OURFALIAN
Nearly 170 Civilians Left Aleppo Via Aid Corridors Since Thursday
Russia has also prepared 14 tons of humanitarian cargo for those fleeing the militants, with 2.5 tons of food and essentials already supplied, he added.

According to the civilians who managed to reach safety, living under militants is horrible.

"We left with our remaining children. May God punish the rebels. They did not allow us to leave, they deprived us of gas, water, electricity and bread. We were not allowed to leave. There were no medicines. They used to tell us you live with us or die with us," one of escaped women said.

"We suffered and walked a lot, may God curse the rebels. They did not leave food or medicine and by the time we left it was not easy," another resident added.

Russian-Syrian humanitarian operation in Aleppo began on Thursday when three humanitarian corridors were opened in the city.

Some 14 Tonnes of Humanitarian Aid Delivered to Aleppo Checkpoints