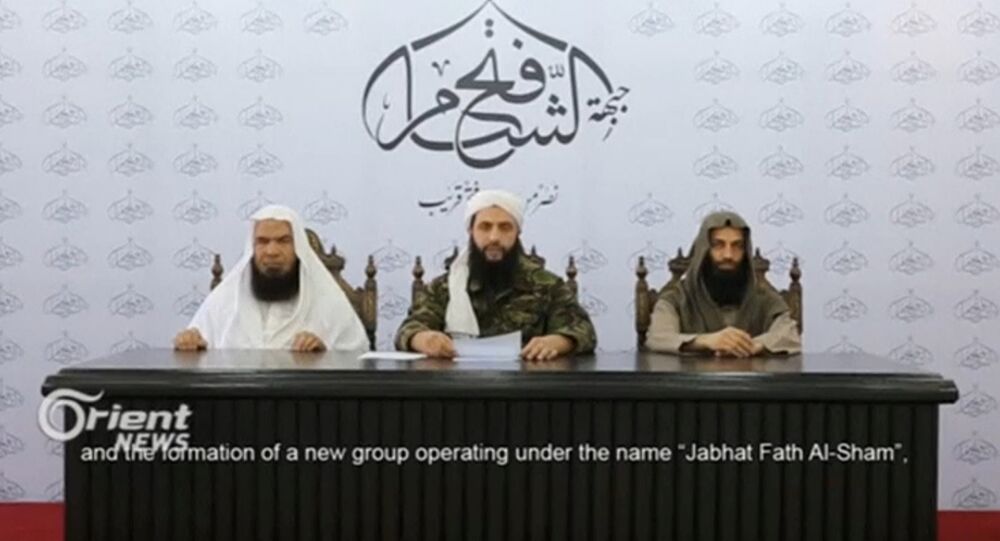 Commenting on Jabhat al-Nusra's absurd rebranding effort, political commentator Vladimir Ardaev noted that Russia's leadership certainly isn't going to buy the bill of goods the terrorists are trying to sell, adding that he hopes that Western powers don't allow themselves to be fooled, either.

This week, the Jabhat al-Nusra terrorist group announced that it had made a decision to break its ties with the al-Qaeda terrorist network and to change their name to Jabhat Fatah al-Sham (the 'Front for the Conquest of the Levant').

The group, long referred to by much of the news media as al-Qaeda in Syria or simply Nusra Front, used the instability in Syria over the past half-decade to seize control over several areas of the country, their presence concentrated in Syria's northwestern province of Idlib.

© Flickr / coolloud
Islamists Easily Betray Each Other Under Syrian Army Pressure in Aleppo
In an analytical piece for Russia's RIA Novosti entitled 'Jaabhat al-Nusra's Rebranding: Why are Rats Trying to Come Off as Rabbits', Ardaev emphasized that "neither Russia nor the US intend to change their attitude toward the group following the rebranding," and that is encouraging.

For his part, director of National Intelligence James Clapper described the move as a "PR move," and suggested that the group "would like to create the image of being more moderate."

"I think they are concerned at being singled out as a target, particularly by Russia," Clapper added.

Earlier, State Department spokesman John Kirby indicated that the US will continue to consider Nusra a terrorist group.

The Russian Foreign Ministry has been no less severe, emphasizing that the terrorist group, "whatever it may call itself, was and remains an illegal terrorist organization," and will be fought to its destruction. For his part, Igor Morozov, a member of the Federation Council's Foreign Affairs Committee, emphasized that Russian warplanes would continue to destroy the group's formations in Syria.

© AFP 2020 / MANDEL NGAN
Russian Assistance Necessary to Defeat Al-Nusra Front – US Anti-Daesh Envoy
Suggesting that last week's move was a "carefully thought-out plan," Ardaev suggested that the move to try and split the Nusra Front off from association with al-Qaeda is nothing new, and has been in the works over the course of the past two to three years.

Speaking to Ardaev, Middle East expert Semyon Bagasarov pointed out that Nusra Front leader Abu Mohammad al-Julani has been actively working to present himself and his group as a moderate, with the Persian Gulf nation of Qatar effectively supporting this line.

According to Bagdasarov, the Nusra Front may not have managed to capture as much territory as Daesh, but the territory they do have under their control is more strategically significant than much of the vast empty space controlled by Daesh in Syria's eastern regions. Specifically, the Syrian province of Idlib, bordering Turkey, was intended to be the site of the Nusra Front's own caliphate. And according to the expert, they're not going to give up on that effort.

"In this situation, it's very important for the group that the UN does not consider it a terrorist group, and one associated with al-Qaeda at that," Bagdasarov added.

For its part, al-Qaeda appeared to have realized that not all was going well for their Syrian franchise. On the eve of the break, al-Qaeda leader Ayman al-Zawahiri issued a statement where the Nusra Front was given the right to act with more autonomy. If fact, according to Bagdasarov, the two groups may have even agreed to the formal split.

According to the expert, the attempt at rebranding "seems at first glance to have been a simple, even primitive calculation that having split with al-Qaeda and changed its name, the terror group would fall out of the list of terrorist organizations. After that, the logic went, it could even be counted among the 'moderate' Syrian opposition, and included in the Geneva peace talks."

Unfortunately, according to Yuri Bialy, vice president of the Moscow-based Experimental Creative Center Foundation, Nusra may have some success on this front. The terror group, he noted, is counting on receiving support not just from some Arab countries (Saudi Arabia in particular) but even from some Western powers, including France and the UK.

© AFP 2020 / RAMI AL-SAYED
Terrorist Attempts to Change Image Futile - Moscow on Nusra Front’s Split From al-Qaeda
At the same time, Bialy warned that the rebranding may have other reasons. "It's possible that we are speaking about a tighter coordination and integration with Daesh. Earlier, some operations carried out by the Nusra Front clearly indicated an attempt to support Daesh, to the detriment of al-Qaeda. The question is whether or not this was done on purpose. [After all,] al-Qaeda and Daesh are in a direct competition, always and everywhere, and with equally large ambitions. The only difference is in the degree of pathos – the statements coming from Daesh demonstrate that it has more of it."

For his part, Dmitri Abzalov, the director of the Center for Strategic Communications, pointed out that even direct violent clashes between the Nusra Front and Daesh have not prevented the two groups from cooperating in the economic sphere.

"For a long time, the Nusra Front controlled a large portion of the Syrian-Turkish border, through which the oil caravans produced on Daesh-occupied territory made their way to Turkey. Throughout this period, Nusra acted as a kind of commodities broker for Daesh, helping it to sell its black gold on commodities exchanges."

© AFP 2020 / Fadi al-Halabi/AMC
Al-Nusra's Rebranding: New Project Aimed at Replacing Daesh?
Ultimately, Abzalov suggested that broadly speaking, the Nusra Front, or 'Jabhat Fatah al-Sham', as it now prefers to call itself, has found itself in a much more difficult situation than Daesh. If the militants of that group can freely escape Syria and head east for Iraq, Nusra is in a situation where they are being pressed against the Turkish border in their main base of support, the region of Idlib.

"Taking into consideration the new relations between Turkey and Russia, the Islamists will no longer be able to count on Ankara's assistance. The last thing they will be able to hope for is a measure of leniency toward themselves, hence the attempt to soften their radical positions. Therefore, the renaming, and the renunciation of ties with al-Qaeda really suggests that the group is in its death throes."

Accordingly, Abzalov noted, the terrorists' rebranding effort indicates that the situation in Syria is beginning to improve in a fundamental way.