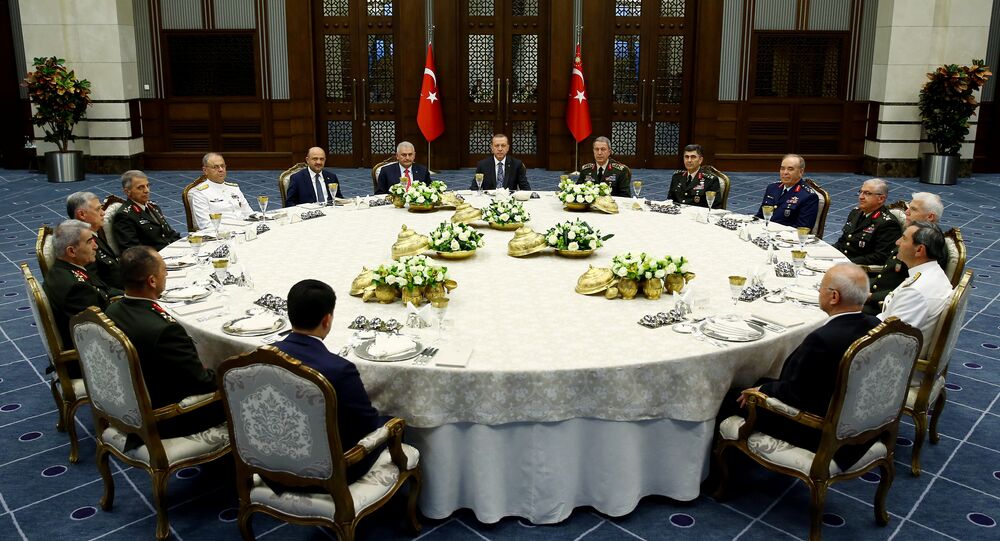 Turkey will not face sanctions from the West over its purge, which followed the failed military coup earlier this month, though the Turkish public is concerned about its scale, Unal Cevikoz, former Turkish Ambassador to Iraq and the UK told Radio Sputnik.

Following Turkey's failed military coup on July 15, Turkish President Recep Tayyip Erdogan has carried out a large-scale purge of individuals in the military and civil service who his administration suspects of involvement in the coup plot.

​The President blames US-based Muslim cleric Fethullah Gulen and his followers for plotting the coup, and among the political measures proposed in its aftermath is a renewed insistence on reforms to the Turkish constitution in order to give more power to the presidency, rather than parliament.

© REUTERS / Kayhan Ozer
'Unresolved Kurdish Issue Remains Breeding Ground for a New Coup in Turkey'
Unal Cevikoz, former Turkish Ambassador to Iraq and the UK told Radio Sputnik that Erdogan's proposals are unlikely to be approved by the Turkish parliament.

"The main opposition party has already made its position very clear, they are against this kind of development and that is going to be problematic."

"President Erdogan wants to make a change which in the final analysis, could be a kind of de-facto executive presidential control, but in order to achieve that there is a need for a constitutional amendment," Cevikoz said.

Cevikoz said that the constitutional amendments proposed envisage direct presidential control over the armed forces and national intelligence agency, whose leaders are currently subordinate to the office of the prime minister.

"The President has also mentioned his wish that the commanders of the army, navy and air force be subordinated to the Ministry of Defense, so that also requires another change. If that kind of amendment happens that is going to drastically change the influence of the armed forces in the Turkish administrative system."

Cevikoz said that Erdogan's ambition to transform the Turkish political system from a parliamentary to a presidential one also faces opposition from within his own Justice and Development (AKP) party.

"There is a reaction within the public and parliament, and it is not only the opposition party and members of the public but also some MP's within the ruling AKP who are against this presidential system."

"On the other hand, the constitution is also quite vulnerable and it has perhaps been depreciated because of certain influences by the political authority and this is the reason why almost all the parties agree there is a need for a new constitution," he said.

"I think this issue is going to be debated in the public very seriously and there is no consensus on it, so these two issues will remain on the agenda of the Turkish public and political authority for quite some time."

Cevikoz said that the government's purge of thousands of employees of Turkey's military, civil service and education system has caused some anxiety within Turkish society.

The attempted coup was put down in the early hours of July 16, and the following day, 2,700 judges were dismissed, followed by 9,000 state employees from the police force and government ministries.

More than 15,000 state education employees have been fired, and the higher education council has demanded the resignation of 1,577 university deans.

© AP Photo /
Turkey Identifies Percentage of Military Ankara Claims Took Part in Coup Attempt
The Turkish government has said that at the end of the judicial process, people who have been fired or detained by police will be able to go back to their jobs, if they are found not guilty of any offence related to the coup.

"There is a concern that all this is not happening within the rule of law, but of course there is a state of emergency," Cevikoz said, and reminded listeners that France has also declared a state of emergency and suspended human rights, in the aftermath of the Nice terrorist attack on July 15.

"In Turkish public opinion there is a great concern that the rule of law is also suspended, so that is why some people are critical of these mass and indiscriminate expulsions from the civil service is going a little bit beyond the measures the government should be taking."

Cevikoz said that despite their own concerns about the crackdown, politicians in Europe and the US are unlikely to sanction the Turkish government.

"If the expulsions from the civil service or bureaucracy continue, and if they reach the level where they are quite indiscriminate, (where) there is a suspension of the rule of law, and if these developments are considered to be undemocratic, and if there is a tendency of growing authoritarianism, then probably the EU and Council of Europe would look at it and send certain signals to the Turkish government. But, I don't think that Turkey will be subjected to any sanctions from the international community yet," Cevikoz said.